It is often said that demography is destiny. On Thursday, April 29th, The Global Interdependence Center will host Charles Goodhart and Manoj Pradhan to discuss their new book The Great Demographic Reversal: Ageing Societies, Waning Inequality and an Inflation Revival. Dr Goodhart will also be accepting the Frederick Heldring Award for Global Leadership (named after GIC’s founder and Chair from 1976-2000.) Free registration is available at https://www.interdependence.org/events/browse/frederick-heldring-award-for-global-leadership/.

Having finished reading the book recently, I strongly recommend the event — as I agree with much of their thesis, so it must be right. At its core is the observation that a unique set of demographic events came together at the start of the new millennium, with the entry of the global baby boom into their peak earning years combined with the opening of China, which led to a surfeit of both labor and savings. This reduced inflation and interest rates – but increased inequality as asset holders won and Western manufacturing sectors were hollowed out. They note that as the baby boom moves into retirement (with more spending on health care) and China’s growth cools, these trends are now reversing. The book examines a number of alternative scenarios – more technology, later retirement, the rise of Africa – but finds none of them powerful enough to offset the coming demographic wave. They also explain why Japan is not the proper counterfactual, as its aging came early enough that it was able to invest in a rising China (and Asia, in general) to counter their declining population. Bottom line, they see the global backdrop much as we do, which presents a scary future – as the forces that created a unique symbiotic relationship between a rising labor-intensive China and a capital-intensive West ultimately lifted China’s poor to the detriment of the West’s working class. The current political backlash is fanning nationalism and a return to programs that will favor the lower income and retirees. With less trade and more entitlements ahead, the risk of inflation is rising.

While Goodhart and Pradham focus on the rapid aging of China as one of the drags on future labor availability, we are far more concerned with the rise of China’s middle class as a widely underrated demographic force that will reshape global economics and politics. Most demographic analysis of China looks at the impact of the 1978 one child policy and the consequences for a rapidly aging population – especially after 2050. However, 1978 also brought the reopening of the universities, and over the past forty years China has developed into a nation of single children with parents and grandparents investing heavily in their education. Even with the elimination of the one child policy, higher incomes and greater urbanization have reduced birth rates to Western norms. By 2040, China will have doubled its population over 60 to 400 million – but there will also be 100 million fewer under 20. Bottom line, China is currently swapping dependent children for dependent elderly. This is a demographic nightmare after 2050. However, for the next twenty years, China will be generating a huge increase in income for those working– as they have far better education and will be satisfying the needs of the swelling previously high-saving elderly. Even by 2040, the biggest rise in elderly will be between 65-75. These currently 45–55-year-olds are in far better health than their predecessors due to medical advances (plus no starvation) and higher education and income. China may have major issues after 2050, but in the coming decade their demographic makeup will improve their global influence and status – especially in financial markets as they gain a growing share of global wealth.

These two charts from the American Enterprise Institute’s study on Chinese demographics show: 1) that population is not falling before 2040 – just re-distributed by age; and 2) that educational attainment will be much higher at all ages by 2040 – but particularly among the recently retired. This 2018 report has 25% post-secondary education – but that is just college grads. With trade schools, it is already over 50% for those 20-25. 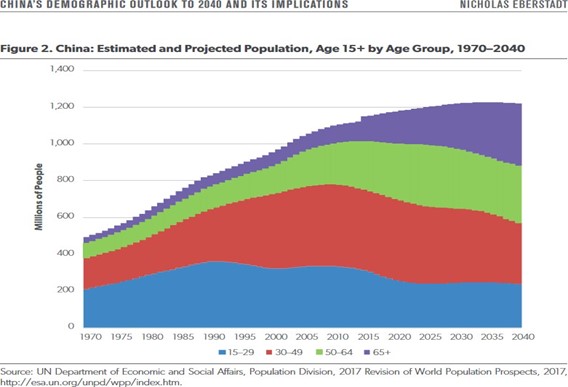 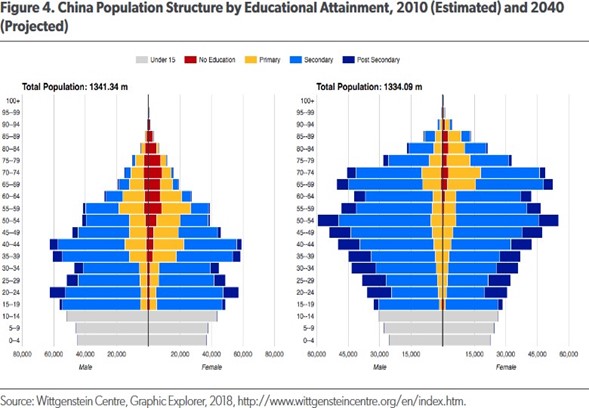 The bottom line is that China’s educational wave will provide its economy substantial protection against the effects of aging not found in Western societies, where retirees are often as well educated as recent entrants to the labor force due to a post-WW2 education wave. Retirement in China is currently at 60 for men, 55 for female civil workers and 50 for other female workers –set when life expectancy was shorter due to rural life. It is widely expected these age limits will be raised to defer some pension costs. The earlier breaking of the iron rice bowl, through SOE reforms in the late 1990s, significantly increased private savings – which remains true today. China’s coming retirees know they cannot rely on the state or their offspring to support them in old age. They have had decades to prepare, unlike the elderly now who suffered during the 1960s, mostly missed higher education, and make up a lop-sided share of the 500 million rural citizens. That China got old before it got rich may be true for those retiring now, but in 20 years the far larger cohort of elderly will be younger, healthier and wealthier.

Moreover, over the next two decades, the middle-class that will be nearing retirement will also be older and wealthier — more like Japan at the peak of its saving cycle in 2000 and the US in 2020. Will their growing spending power and capital be spent enticing those over 60s to stay in the workforce, invested in domestic technology, or sent abroad to produce imports — as Japan and US did? We see the recent weakening of hukou laws as a form of internal immigration, as China now allows its migratory rural workers to establish permanent residence in urban areas. Will the outlook for declining population (and watching Japan’s example) shift spending away from construction and into other more productive industries? Clearly, the Party is thinking longer term, shifting investment away from housing and travel infrastructure and toward technology and import replacement.

Bottom line, as China ages over the next 20 years, both their rising average age and incomes suggest that more of growth will be in the service sector than in goods. This tracks the developed world’s recent growth path – but is likely to be less beneficial to the rest of the world than when China advanced by becoming the factory floor for a service-oriented West. China’s unique scale and homogeneity provided substantial advantages to multinational firms that were developing and expanding production – and concentrating their supplier bases. There will be no China for China to exploit as it advances into a service economy. That alone may be the most inflationary aspect of future demography. No matter how much capital is thrown at the next tier of developing nations, it will be less effective than when ramping up China — given the diversity in languages, politics, cultures, and trade routes.

China may have a more serious demographic problem from aging than many nations in the West – especially the US – but that gap is unlikely to be meaningful for at least a decade. China’s economy is already passing the EU (especially without the UK), is 75% as large as the US – and it leads the world in exports and total trade. It is likely to become significantly richer before aging affects production, as it alters retirement rules and targets investment to narrow the skills gap with the West. Note that China’s work age population has been falling at a 0.5% annual rate over the past three years – which has accounted for virtually all of the decline in their reported trend growth. Unlike the West, which was hollowed out by the rapid rise of China, their factory base will erode at a slower pace.

In the current political setting, that likely means even more friction between a rising China and an aging West – moving the global political calculus away from just maximizing economic growth to more social issues like control, security, fairness and equality. We expect Western governments will attempt to recoup part of the wealth accumulated through investments in China and increase restrictions on future development, while using future revenues and deficit spending (or financial repression) to support those who were most affected by China’s rise — the lower income and retirees. Regardless of whether we agree with these goals, both the economics and historical precedents tells us they are inherently inflationary – slowly at first, and then all at once.

Bottom line, the global shifts starting around 1978 were revolutionary in their impact on world economics – the Volker Squeeze, Thatcher/Reagan, and China’s one-child policy and reopening of universities. Within a decade, inflation and communism as we knew them were dead. Four decades later, the baby boom’s revolution has run its course and the pendulum may be swinging back, as a new generation of business leaders and voters respond to a different set of perceived problems requiring new answers. Bottom line, it is not your Grandpa’s economy. Thinking globally, as seen in Goodhart and Pradham’s book, is essential to getting it right for the coming decade.

Michael Drury is the chief economist for McVean Trading & Investments, LLC. He joined the firm in 1992, after serving for five years as senior economist with Allen Sinai at Shearson Lehman Brothers and its successor firms. Michael began his career in New York in 1982 as senior economist at A. Gary Shilling and Company. He received his B.S. in economics from the Georgia Institute of Technology and did his graduate work at the University of Wisconsin-Madison.

Michael assesses macroeconomic developments around the world to help develop hedging strategies using futures markets in interest rates, currencies and industrial materials. He travels extensively in the United States and China, as well as to Japan, Europe and Latin America. Michael is the author of McVean Trading’s “Weekly Economic Update.” He is the chairman emeritus of the Global Interdependence Center, president of the Economic Club of Memphis, was the founder and first president of the MidSouth Association for Business Economics (a chapter of NABE), and is a member of the National Business Economic Issues Council (NBEIC) and a non-resident member of the American Chamber of Commerce in Beijing. Michael lives in Germantown, Tenn. with his wife, Mahrou, and has three children.