If You’re Lucky Enough to Be Irish…

‘…then you’re lucky enough,’ as the saying goes.  Having grown up in a proud Irish household, with ancestors stemming from County Mayo and County Meath, I was pretty excited to plan GIC’s conference in Dublin. Our program in Ireland, held September 28-30, was the seventh out of our eight international events held in celebration of GIC’s 40th Anniversary in 2016, with the final event taking place in Madrid the following week on October 2-4. 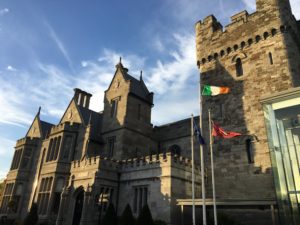 Many years ago, while in college during a Celtic Christianity course, I had taken a multi-city tour of Ireland and was looking forward to returning, this time focusing solely on Dublin, The City of a Thousand Welcomes.  I arrived a day early to meet with our program partners at the Central Bank of Ireland and the Department of Foreign Affairs, and also to spend some time exploring the city before GIC’s events began.  My lifelong friend, Kate, joined me in Dublin and we kicked things off in proper fashion with afternoon tea at the renowned Westbury Hotel. Located in shoppers’ paradise on Grafton Street, which is a mixture of fashion and frivolity from designer labels to trinket shops, the Westbury is somewhat of a Dublin institution. As I’d mentioned in my London blog, Afternoon Tea is so much more than just a pot of Earl Grey. It’s a culinary event composed of a variety of pretty little sandwiches such as Honey Baked Limerick Ham, Truffled Chicken Salad, Oak Smoked Salmon and Crab with Lemon Aioli on Homemade Soda Bread, followed by a selection of sweet and savory scones with clotted cream and fruit preserves, topped off with a bounty of beautifully prepared pastries, all served daintily on a three-tiered serving platter fit for two princesses to luxuriate at the best table in the lounge.  Keeping with the royalty theme, this was Kate’s first visit to Dublin and one of her requests was to dine in a castle.  Happy to accommodate the request of my dear friend, I researched and found the Clontarf Castle, a 12th century castle, now a four star hotel, just 15 minutes from the city center. That evening, we enjoyed a lovely dinner in the Knights Bar, surrounded by the medieval charm of vaulted ceilings, stained glass windows, and crackling fireplaces. We were also told that the castle was haunted, but chose not to stick around long enough to find out. 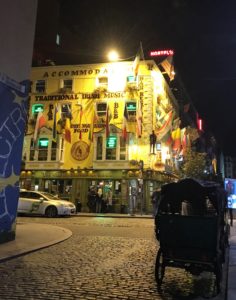 The following day, I had arranged a guided tour of the Guinness Storehouse for the GIC delegates, where we learned the history of the world’s number one stout, introduced in 1759.  Beginning with the family history of Arthur Guinness, we got up close and personal with the brewing process, followed by a demonstration on how to properly appreciate the flavor of Guinness, as well as a look at eighty years of imaginative marketing campaigns – my favorite being its first newspaper advertisement from 1929 specifying Guinness as ‘one of the most nourishing beverages that enriches the blood, builds strong muscles, and eases insomnia.’ (I told you they were creative…) Our tour concluded with a fresh pint at the Gravity Bar on the top floor of the storehouse with 360-degree views of Dublin. 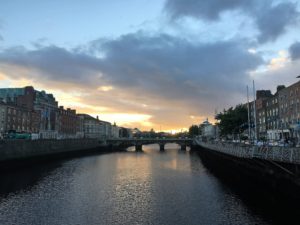 A second group touring option for GIC delegates was our private visit to the Old Library at Trinity College to see the Book of Kells.  Still shrouded in mystery, the Book of Kells is an ancient manuscript of the four gospels dating back to the 800s. It is famous for its extravagant and detailed artwork throughout its pages (actually calfskin) which were meticulously worked on by monks.  It is a beautiful artifact salvaged from a monastery that was founded in the year 561 off the coast of Scotland. The island, Iona, had been invaded by the Vikings, and the book brought to Ireland, to a monastery at Kells in County Meath in the year 806.  Our tour also included a visit to the Long Room, which houses 200,000 of the library’s oldest books in beautiful oak bookshelves and lined with marble busts of the world’s best known writers and philosophers. The Long Room is also home to the oldest harp existing in Ireland dating from the 15th century, which is also the model for the national symbol of Ireland. 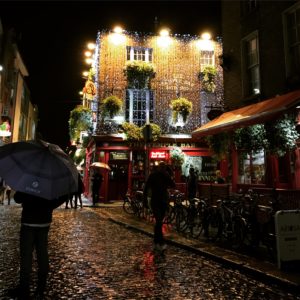 Part of GIC’s programming was taking place at the recently renovated Hotel Morrison, situated on the north side of the River Liffey. This was a strategic location for our group as it was also within walking distance to Trinity College and the Central Bank of Ireland, as well as being coincidentally a five-minute jaunt from the popular Temple Bar district.  The unmistakable charm of Dublin is most felt in the evening when the streets of Temple Bar are filled with music and merriment.  Stop into any one of the pubs whose friendly doorways overflow with the cheerful sounds of the fiddle and banjo, and you’ll be met with a cold pint and a warm welcome. With four nights in Dublin at least two nights were meant for joining the fun across the river, over the cast-iron pedestrian walkway, the historic Ha’Penny Bridge. My top choice would have to be Oliver St John Gogarty – is it a hostel, is it a restaurant? A music venue or a bar? – I’m still not sure, but much like the city of Dublin, it’s a guarantee for a good time.

Queen of Tarts: Stop into this cozy little bakery and café on Dame Street and warm up with a cup of tea and one of their freshly made desserts.  Their enticing dessert counter had me conflicted on which to choose but I can affirm that blackberry-apple crumble did not disappoint.
Copper Alley Bistro: One of the best plates of fish and chips I’ve ever had and I have years of extensive worldwide research.  Inside the Harding Hotel next to Christ Church Cathedral http://www.copperalleybistro.ie/
Beyond the Barricades – 1916 Uprising Tour: This historical city bus tour puts visitors right in the middle of the rebellion on Easter 1916 with live reenactments of true stories from the time of the uprising.  This 90 minute tour is passionate and intense and thought provoking.
Don’t leave Dublin without: A gift for your loved one from the Aran Sweater Market. With so much more than just sweaters fit for my grandmom, the purveyors of traditional woolen wear from 1892 sell various styles of hats, gloves, scarves, blankets, socks and pretty much something for everyone.

Trade has been the Antidote to War in Europe

One response to “If You’re Lucky Enough to Be Irish…”