Soaking up the Sarasota Sunshine

Thanks to our longstanding sponsor, Cumberland Advisors, an investment advisory firm with offices in Vineland, NJ and Sarasota, FL, GIC has been fortunate to have developed two program partners in the latter (and significantly warmer) region.   Since 2012, GIC has been working with our collaborators at the New College of Florida on their New Topics at New College lecture series and in 2015, the FPA of the Suncoast joined GIC as our second program partner. 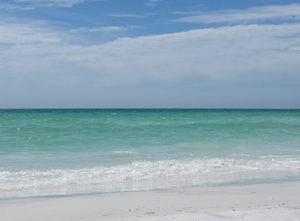 Looking out over the Gulf of Mexico from Lido Beach.

This year, GIC will host two conferences again in Sarasota, on February 19th and April 28th with FPA and New College respectively.  Both events will take place late in the week making a long weekend visit in Sarasota well within reach.  Depending on your city of departure, getting to SRQ, the local airport in Sarasota airport, may require a layover, as it does from Philadelphia. Instead, I prefer to fly nonstop to Tampa International and rent a car and take the pleasant one-hour drive over the Sunshine Skyway into Sarasota.  Accommodations in Sarasota may seem like slim pickings with not much beyond the Grand Hyatt and Ritz Carlton, but you’ll find the boutique Hotel Indigo is both appealing and affordable.  It has nicely appointed, tropical-themed guest rooms with complimentary wifi and free parking. The Indigo has a restaurant, bar and modest wading pool and what I find to be the hotel’s best amenity; bicycles for rent! 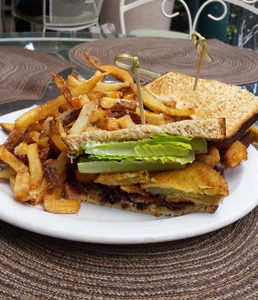 So slip into your swim suit, pack your beach bag and your appetite and start pedaling over to my favorite place to have lunch in Sarasota: Station 400. Open daily for my favorite meal of the day (brunch), Station 400 is a reassembled railroad depot from the 1850s in Sarasota’s Rosemary District. Their menu has creative takes on classic dishes such as Smoked Salmon Scramble on toast with melted brie, avocado, arugula, and dill cream; Truffle Eggs Benedict; and Nutella waffles with strawberries, banana brûlée, and vanilla bean whipped cream. There’s even a pancake parlour with six different preparations including coconut custard and ricotta with blackberries and lemon curd. Lunch offerings include Lemon Poached Shrimp Salad, the “Diplomat” Grilled Cheese with crispy pancetta, caramelized pear, balsamic syrup, arugula, and camembert and my favorite: the Fried Green Tomato BLT. There are so many delicious options, I would consider their menu leisure-reading material. 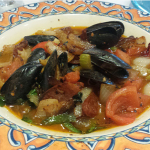 Mussels and chorizo at Columbia on St. Armand’s Circle.

Sarasota has no shortage of tourist attractions so you can make lots of plans, make zero plans, or just sit at the beach and think about the plans your friends up North have to shovel snow.  When visiting a warm and sunny destination, the beach is my first priority, especially when escaping the bitter Philadelphia winter. Sarasota has 35 miles of sandy shores along the Gulf Coast including my preferred spot, the low-key Lido Beach on Lido Key (just 3 miles from the Hotel Indigo – I’ve biked it!), complete with a little hidden tiki bar run by the Ritz Carlton Beach Club. If it’s a Saturday, stop by the Sarasota Farmers Market on the way and pick up some goodies for a beach picnic.  There are several popular beaches along the six islands on the coastline but the most visited beach is a little further south: the widely popular Siesta Key, rated “Number One Beach in the US” by multiple sources year after year for its dazzling white sands. 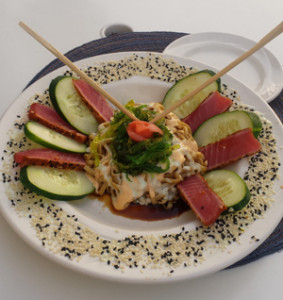 Seared ahi tuna over chilled organic udon noodles tossed in a house-made Mongolian sauce with pickled ginger, wakame seaweed salad and sriracha-mayo dressing at the Terrace at the Surf Shack.

If you’re not into sun and top-rated sand, visitors can choose from a variety of activities such as chartering a fishing boat out on the Gulf, spending a day shopping and dining at the upscale St. Armand’s Circle, wandering through one of the area’s lovely botanical gardens, catching a fly ball at a Baltimore Orioles spring training game or getting tickets to a show at one of the many performing arts venues.  Sarasota has a thriving arts community with a symphony orchestra, an opera house, concert hall, and ballet, in addition to several theaters and museums, and of course, the legacy of The Greatest Show on Earth. An article about Sarasota would be incomplete without mentioning The John and Mable Ringling Museum of Art.  John Ringling, one of the five brothers who ran the famous Circus, was one of the most successful men in America during the Roaring Twenties, and a huge influence on the early development of the region as a destination for the arts. He and his wife, Mable began building their bayside estate in Sarasota in 1911 and today, it’s a major attraction and important part of the community (circus is even offered in high school as an extracurricular activity). The grounds of the estate are home to his elaborate mansion, Ca’dZ’an (House of John), the circus museum, an art museum, a theater and a botanical garden.

So, trade in your snow boots for swimsuits this winter and join GIC for an event in the Sunshine State.

Places to Go, Paintings to See, Fromage to Eat; Squeezing it all in while in Paris