×
Home > Blog > ‘Safety’ vs. ’justice’ is a false choice in criminal justice reform

‘Safety’ vs. ’justice’ is a false choice in criminal justice reform 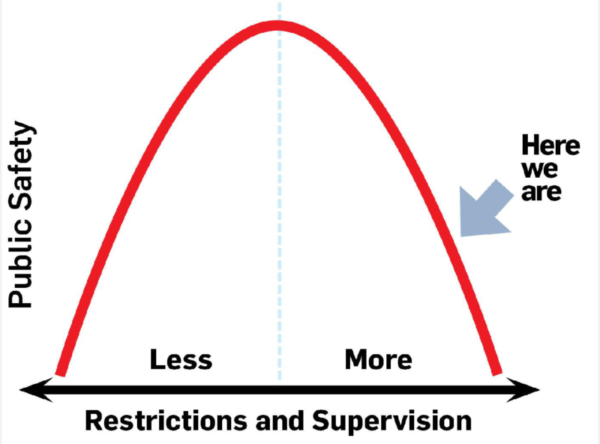 Criminal justice reforms are often perceived as offering a tradeoff between public safety and greater justice for people with criminal records. This is a false choice and a way of thinking that could ultimately undermine progress on both fronts. Understanding the important role that employment plays in rehabilitation and the barriers to such employment offers a new framework for evaluating public policies.

Perhaps our clearest failure in the criminal justice system is demonstrated by our high rates of recidivism. A seminal study by the Bureau of Justice Statistics highlighted the experience of people released from state prisons (roughly 93 percent of those sentenced to prison serve their time in state facilities). Within five years, 77 percent were rearrested. The relationship between employment of people with records and lowering recidivism is complicated, but the direction is clear. Having a job is foundational to reducing crime: a necessary if not sufficient condition in most cases.

Many of our current criminal justice policies actually inhibit employment, most directly through professional licensing restrictions and other regulatory barriers to employment. Other practices disrupt employment — required meetings with parole officers during working hours, court appearances and driver license suspensions can render justice- involved individuals de facto unemployable. More insidious are the vast array of restrictions that affect not just employment but housing, access to credit, access to government facilities or even private facilities fulfilling government contracts. The National Institute for Justice estimates that 44,000 such “collateral consequences” can exist for people with criminal records; some are suitably grounded in protecting the public, but many are not.

Nationwide, movements to lower incarceration and eliminate employment barriers are translating into policies like the elimination of cash bail, early release and record expungement. Given our high recidivism rate, it might appear that this puts public safety at risk. We should balance that concern with the recognition that excessive supervision and restrictions can actually reduce public safety by undermining the employment of people with records. This tradeoff lies along this curve. I believe that many criminal justice policies lie on the right-hand side of that curve, where selectively reducing restrictions will actually improve public safety. Freeing those resources would also allow for more focused supervision on those who present a true danger.

None of this absolves policymakers from the responsibility of formulating prudent policy changes. Risk assessments of the type being developed through the federal First Step Act or those being employed in New Jersey in conjunction with the elimination of cash bail are important tools for lowering public safety risks. Ohio employs a judicial process to grant a CQE (Certificate of Qualification for Employment) that creates relief from professional licensing barriers, and some states have similar programs.

There’s plenty of “low-hanging fruit,” programs that can improve employment outcomes without increasing safety risk. Often these involve training and education behind bars. Michigan’s Department of Corrections has created Vocational Villages, which provide training and credentialing in numerous trades to enhance employment outcomes. The Indiana Department of Corrections has partnered with the Last Mile, a San Francisco nonprofit that teaches inmates software engineering. In one of its women’s prisons, Indiana permits private company Televerde to provide training, fairly compensated in- prison work and a pipeline to post-prison job opportunities.

The enormous size of our justice-involved population (19 million people in the United States with a felony conviction and millions more with misdemeanor records) and the “law of large numbers” guarantees that there will be mistakes made. Some of these mistakes will be tragic and innocents will be victimized.

These incidents will be amplified; justice reform advocates are already talking of the risk of a “Willie Horton moment,” where a single terrible incident could be taken to represent the whole. This risks a backlash to the entire criminal justice reform movement — a rollback of newly instituted reforms or a hardening of opposition to prospective reforms. Any such policy-induced episodes should be balanced against the crimes that did not happen — reduced recidivism due to improved employment and other outcomes. Thoughtful criminal justice reform fosters not only a more just society, but a safer and more prosperous one, too.

Jeff Korzenik is the author of a forthcoming book from Harper Collins on the business case and best practices for hiring people with criminal records. He works in Tampa as the chief investment strategist of Fifth Third Bank. The views are his own and not necessarily those of his employer

Living with Risk: The COVID-19 Iceberg

For more than 30 years, Jeff has been a thought leader in the investment industry. A regular guest on CNBC and Bloomberg, Jeff’s writings on economics and public policy have been published in Barron’s, Forbes, The Chicago Tribune, The Boston Globe and other periodicals. His worked has been cited by The New York Times and The Wall Street Journal. Jeff is a nationally recognized expert on “second chance” employment, private sector models of hiring workers marginalized by criminal records. In addition to regular speaking appearances at conferences and public events, Jeff was invited to testify on Capitol Hill as an expert witness on the use of commodity indexes by pensions and other institutional investors.

Jeff earned both a Bachelor of Arts degree in Economics and a Certificate of Proficiency in Near Eastern Studies from Princeton University in Princeton, N.J.

A passionate supporter of cultural organizations, Jeff serves as a Trustee of the Harris Theater for Music and Dance, and as an Overseer of the Peabody Essex Museum.