The standoff between the U.S. and Russia over Ukraine has sparked renewed interest in a troubling question: Do the U.S. government’s vast debts to foreign nations present a threat to its national security? The fear is that China, Russia or some other major holder of U.S. Treasuries could suddenly start selling, sending interest rates soaring and wreaking havoc in markets.

Actually, anyone worried about what will happen with the Treasury market should be paying at least as much attention to the Caribbean. That’s where some of the most important “foreign” holders can be found — typically, U.S.-based investors and companies keeping money abroad for tax purposes.

Two events in recent weeks have fanned concerns about an attack on the Treasury market. First, an advisor to Russian President Vladimir Putin warned that his country could respond to U.S. sanctions by dumping its considerable holdings of U.S. government bonds. Then, a sudden $100 billion drop in the amount of Treasuries held at the Federal Reserve on behalf of foreign central banks prompted speculation that Russia was following through on the threat.

So far, the fear has proven unfounded. No major sell-off ensued, suggesting that the $100 billion was simply shifted to a different country for safekeeping. More importantly, Russia’s holdings of Treasuries aren’t large enough to do a lot of damage: As of the end of January, they amounted to $132 billion, or about 2 percent of all foreign holdings of U.S. government bonds.

That said, other foreign holders do have a lot of power to move the market. Their activities bear watching as one of the world’s largest holders of Treasuries, the Fed, curtails the monthly purchases it has been making to stimulate the U.S. economy.

By some measures, Asian countries are the most important foreign holders of U.S. Treasuries. As of January, China and Japan each accounted for more than 20 percent of the $5.8 trillion in total foreign ownership. They are also among the largest net purchasers, meaning that their monthly purchases tend to exceed their monthly sales.

Both have at some point threatened to reduce their holdings. Such bluster must be viewed skeptically: If they started dumping Treasuries, they would knock down the price and precipitate big losses for themselves. In other words, the sheer size of their holdings makes them less of a danger, because they’re interested in the stability of the market (and of their exchange rates).

Lately, though, another group of foreign holders has become increasingly significant: financial centers such as the U.K. and various Caribbean islands. These are proxies for hedge funds, investment managers, and U.S. companies keeping their cash abroad in tax-advantaged jurisdictions. Holdings in the U.K. and the Caribbean amounted to just $456 billion as of January, or about 8 percent of the total. But such investors account for a much larger share of gross transactions, the total value of bonds bought and sold across international borders. Hence, their shifting risk attitudes and reactions to policy moves can create volatility, affecting Treasury yields and interest rates on all kinds of debt. 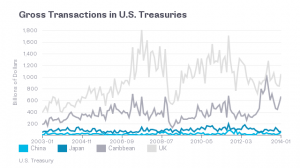 Because China and Japan tend to buy and hold their investments in U.S. Treasuries, rather than doing a lot of trading in and out, they play an almost insignificant role in gross transactions (see chart). In January, for example, the two together accounted for only 5 percent of all gross cross-border activity by foreign entities. Investors in the U.K. and Caribbean financial centers, by contrast, accounted for 37 and 24 percent respectively. The gross flows tend to closely track financial events and policies, falling in the darkest crisis days of 2009 and booming in time along with the Fed’s bond-purchase programs, known as quantitative easing.

The preceding was originally posted on Bloomberg View (available at http://www.bloombergview.com/articles/2014-03-30/why-russia-won-t-tank-the-u-s-treasury-market) and is reposted here with permission of the author.

Trees Don’t Grow to the Sky

Catherine L. Mann is OECD chief economist and head of the economics department since October 2014. Ms. Mann is responsible for advancing the strategic orientations of the OECD and ensuring the high impact and relevance of the work of the department, including maximizing current products like the OECD’s Economic Outlook, country-based economic surveys and the Going for Growth report.

Ms. Mann ensures that the department is at the forefront of economic thinking and coordinates the work of the country and policy studies branches to create new opportunities and enhance synergies and cooperation with the whole of the OECD, including through contributions to horizontal projects.

Ms. Mann also supervises the contributions of the economics department to the New Approaches to Economic Challenges (NAEC) and Inclusive Growth (IG) initiatives and serves as the OECD representative at the deputies’ meetings of the G20 Finance Track.

Ms. Mann has enjoyed a distinguished career in the public sector and academia. Following 20-plus years in Washington D.C., she was the Rosenberg Professor of Global Finance at Brandeis University and from 1997 to 2011 was a senior fellow and visiting fellow at the Peterson Institute for International Economics. Earlier in her career Ms. Mann served as a senior international economist at the President’s Council of Economic Advisors in the White House and worked as a special assistant to the vice president for development economics/chief economist at the World Bank. She also spent 13 years on the Federal Reserve Board as a senior economist and assistant director in the International Finance Division.

Her research spans two main topics—global imbalances and globalisation of technology and services. On the economic and policy implications of external imbalances and dollar exchange rate, she authored “Is the US Trade Deficit Sustainable?” (1999), and notable articles including: “External Imbalances: Costs and Consequences of Unsustainable Trajectories,” VoxEU (2010); “Managing Exchange Rates: Evidence of Global Re-balancing or Global Co-dependency?,” Business Economics (2004) and “Perspectives on the US Current Account Deficit and Sustainability,” Journal of Economic Perspectives (2002). Her most recent work looks at international capital flows and U.S. Treasury auctions during QE, finding that gross cross-border dynamics are dominated by 'traders' (CFC, UK) not holders (China, Japan), and that international investors bid differently at U.S. Treasury auctions.