On January 13, 2019 Barry and Nancy Shapiro of Sarasota FL traveled with David Kotok to Havana Cuba as part of GIC (Global Interdependence Center). GIC is an international group of which David Kotok is a former program chair. Its purpose is to foster communication between foreign governments and promote foreign commerce. I was there because of an invitation from David. The other guests had a wide variety of qualifications and achievements and could not have been better traveling companions.

I do not have permission to publish names so they have been omitted. The group included the following:

Their resumes are too lengthy to recount here. Their intelligence and insight added much to trip. Nancy and I found them to be some of the nicest people to travel with.

The first thing you notice when entering Cuba are the 1950’s restored American cars. They are fantastic and common throughout Havana. Those of you who are old car buffs would be heaven in Havana. 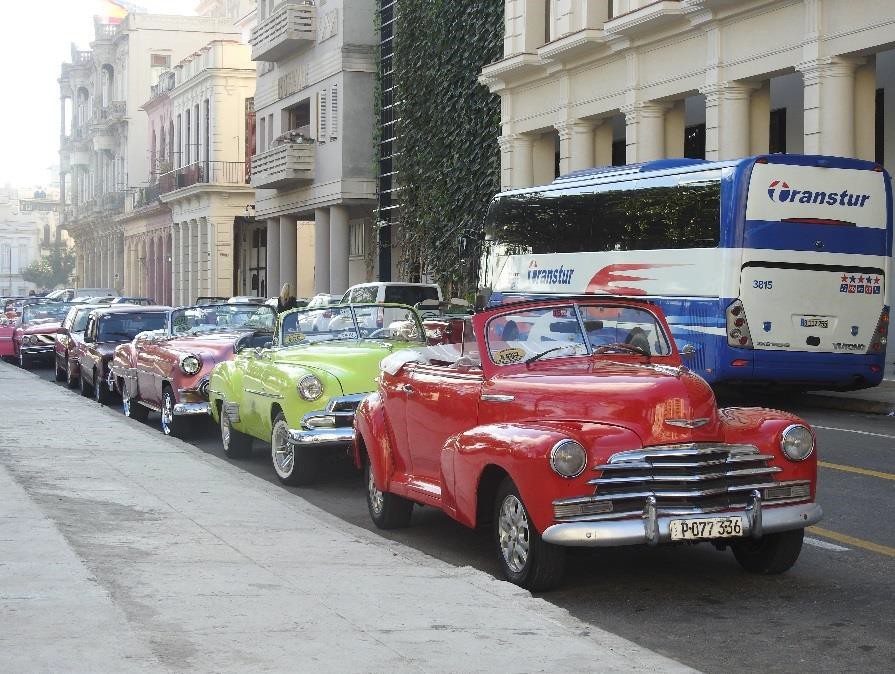 Another thing that immediately stands out is the substantial disrepair of the buildings and infrastructure. Nothing in the way of maintenance has been done for over half a century as can be seen here in old Havana. 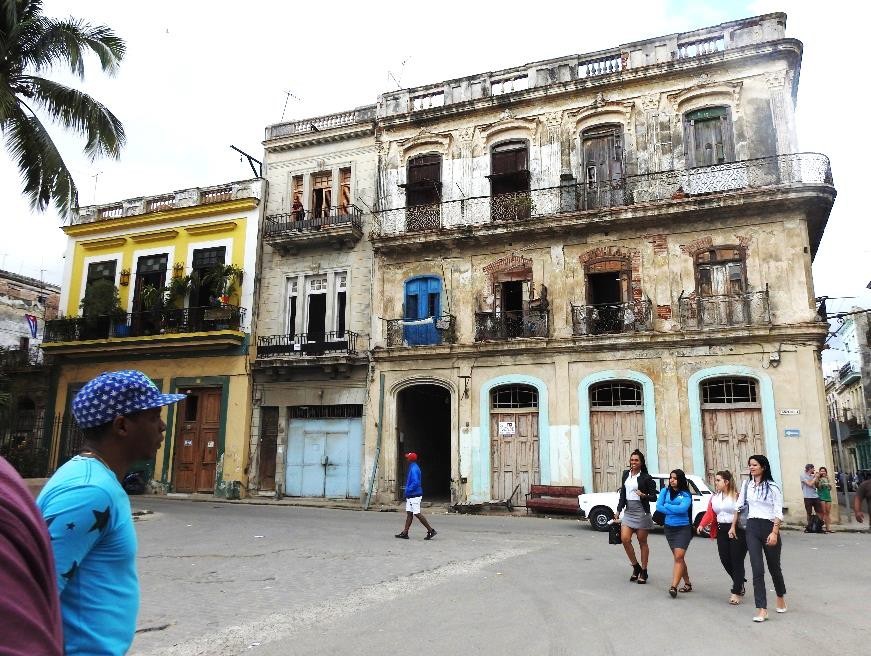 I am not going to recount the five days in chronological order because it was such a whirl wind trip it all seems to mush together. We were scheduled from 9:00 in the morning to after dinner every day and evening. Nancy and I now need a vacation. I am going to try to group the story around common events.

We met lots of local Cubans, experts in their fields, who told us about Cuba and its many challenges. They include:

Each discussion had the same theme, that Cuba’s Socialist society and Communist politics had, and is, stifling the Cuban economy. What was a surprise was to learn that it’s all by design. The government does not want any accumulation of wealth and in fact generates a never-ending list of regulations to promote the equalization of income among all the population.

The lack of any market forces to influence the economy eliminates incentive and in fact creates great differences between their society and the rest of the world. The population is heavily taxed to the extent of almost eliminating personal growth and income.

Being authorized to own a business is almost impossible due to extreme restrictions placed on ownership. Businesses are generally owned by the government. Private citizens can work at service jobs, but must pay half their sales (not net income) to the government. We ate at only Paladars which are private, not state owned restaurants.

My reaction was ‘how stupid’. But the population has now been under such rule for 60 years. Most of the population have never lived any other way. They can’t even envision alternatives because of the government’s restriction on the use of the Internet, American books, movies, and television.

We were left with great frustration at the futility of it all, only to realize the Cuban’s live with this every day without any expectations. 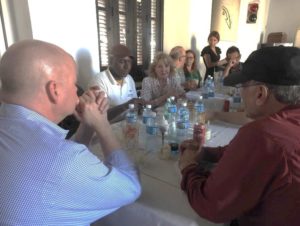 Some examples of the resulting reality for Cubans are:

The other side of the coin is the social services the population is provided from the government.

I have to say that the Cuban people, in my view, were a happy people, and didn’t seem to be as bothered by their predicament as I was.

Several meetings with the Cuban government were arranged for us including: 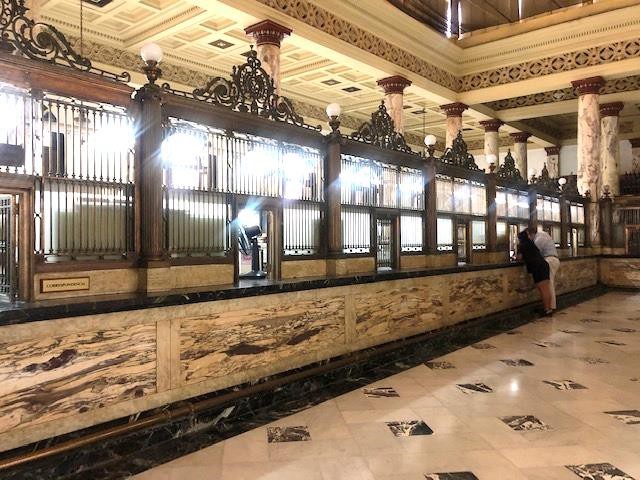 Here is a shot of the Central Bank. It reminded me of the Butch Cassidy and the Sundance Kid movie.

There was a central theme here as well. Everyone complained about the US embargo, loved Obama for removing it, and hated Trump for reinstating it, and think the American goal is regime change.

The officials see and understand the success of several socialist countries like China and Viet Nam. But at the same time they defend their strict system. They understand its failings but want to fix the problems. It’s like not throwing out the baby with the bath water. They a very proud of their people, they are strong nationalists.

If you notice, I have not used any names of the Cuban officials. All of us felt that both private citizens and government officials were surprisingly candid. We do not want to embarrass anyone, and in fact several speakers showed a certain nervousness with the discussions. Also notice there are no pictures of the meetings.

Finally, if our goal was to open dialog, I think we did well. The discussions were open and we all had the opportunity to ask questions. David believes that not many Americans, and certainly no American government officials, ever have these kind of discussions with Cuban authorities, and we were privileged to have such an open discourse with Cubans at the ministerial level. I think the Cuban’s enjoyed the discussion as much as we did.

Did any of this make a difference? Don’t know. Are we likely to have improved relations with the Cubans? I doubt it. But you have to start someplace, and maybe that’s what we did.

Now we certainly had fun investigating Havana as well. GIC did a spectacular job and had arranged everything. All meals were at popular local paladars. Terrific sights around the city. Famous entertainers. Popular night clubs. We visited two artist’s studios and had a breath-taking visit at a local dance studio. And so much more. Following are some photos that I hope capture the spirit of the adventure. 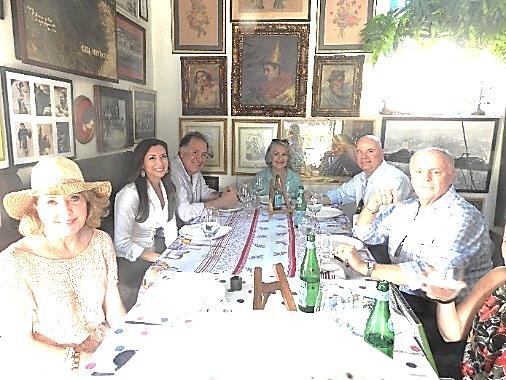 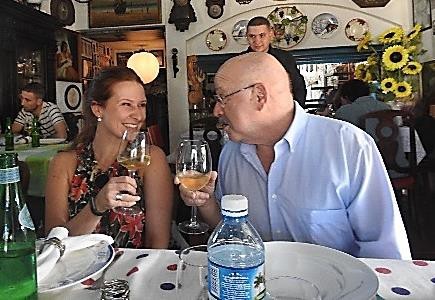 Jacqueline, Donna and David, Christine, Bill and George at lunch the first day. | David and Jill, our leaders. Thank God for Jill. 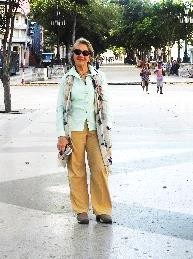 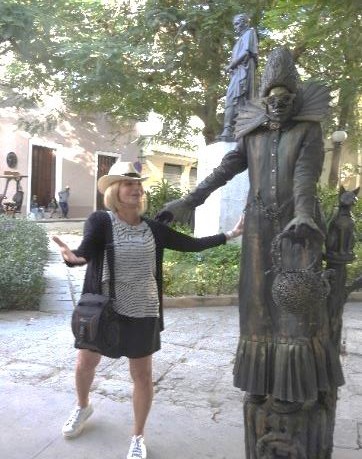 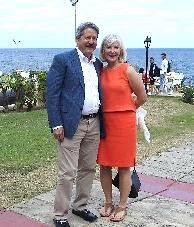 Christine walking on the promenade that goes all the way to the sea. | Nancy dancing with one of the live street statues. | Michael and Vicky after lunch at the Hotel Nacional. 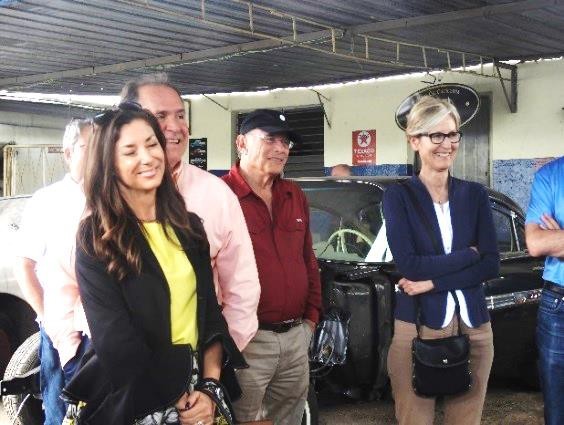 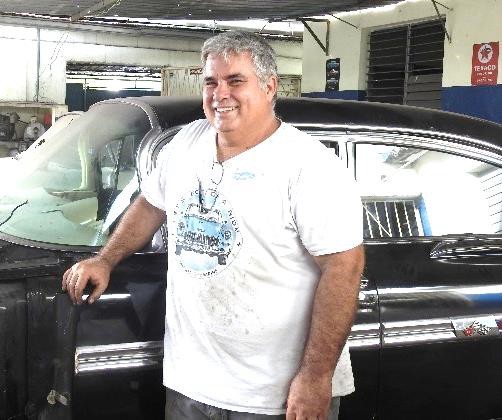 David and Donna, Kathleen and me being lectured by the owner of an auto restoration company. He cannot buy parts directly so he goes to Miami, opens a bank account with a friend, buys parts and ships them to Panama, and they ship to Cuba, all because of the embargo. 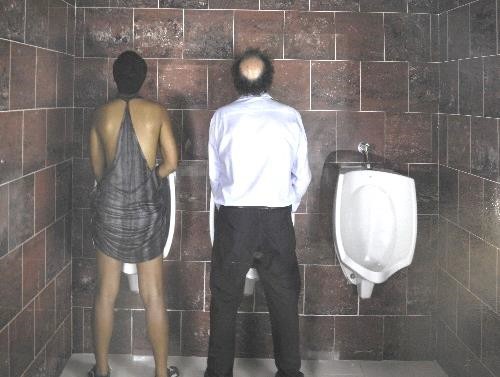 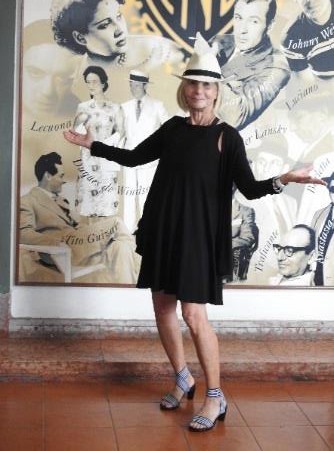 There was some incredible art throughout the city. 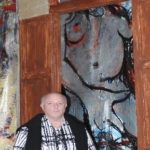 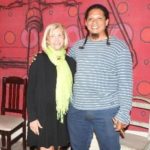 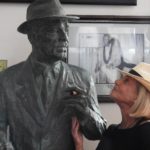 George in front of a lewd painting. Nancy with the artist. And Nancy with a sculpture. 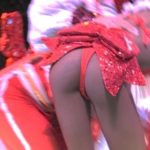 And great entertainers including a fun evening at the famous Tropicana nightclub. It was like a Las Vegas review. We only needed Lucy and Rickey. 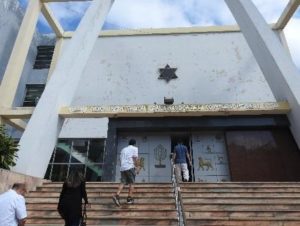 We visited a synagogue in Havana. There are only about 1,000 Jews left in the city. 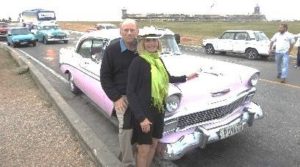 One afternoon we taxied up to the old fort that guarded the entrance to the city. 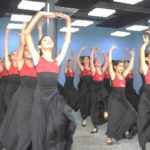 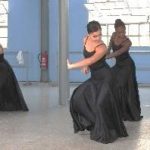 One afternoon after lunch we viewed an incredible performance by a dance troupe. They begin as children and if they are good enough they will become professionals. Christine, Nancy and I are going to try to bring them to Sarasota. 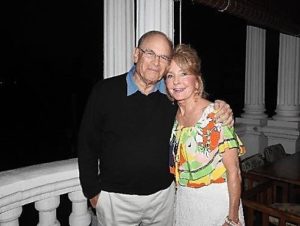 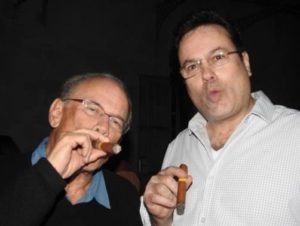 Jacqueline and I after dinner one evening. And Howard and I during a cigar lecture at one of the artist’s homes. 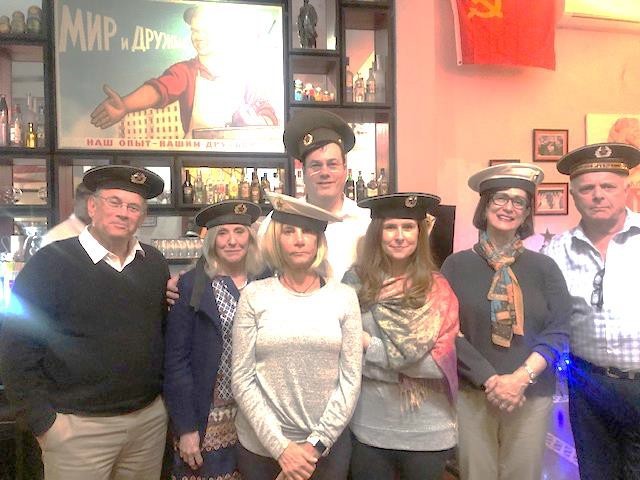 One night myself and Nancy along with Maryanne, Howard, Jill, Natalie and George had dinner at a Russian restaurant, four flights up. We all got a little drunk on vodka shots and started acting like real Russians. 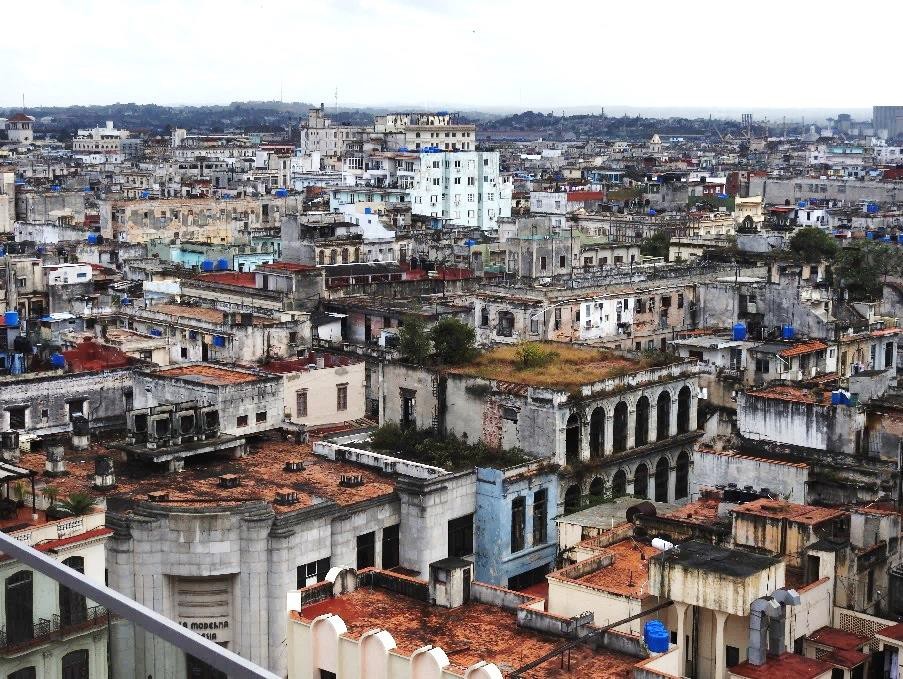 A shot taken from the roof of the Kapinski Hotel where we had lunch just before leaving. We had already said goodbye to our new friends. It was a little sad to have such a good time end.

Barry Shapiro has been active in the management and strategic planning of middle market manufacturing, distribution, and service companies his entire business career. In 1985 Barry co-founded The Anderson Group LLC, a Private Equity group focusing on under-performing acquisition opportunities. Anderson has acquired over 60 such entities since its founding. Barry has an operating background and prior to founding The Anderson Group he was President, CEO, and majority owner of several such operating entities.

Barry has been married to his wife Nancy for 51 years. They have three sons who live in Boston MA, Carbondale CO, and Marin CA and enjoy six grandchildren. Barry’s primary diversion is golf and he and the family spend considerable time in the Aspen CO area. Barry is a past President of the Camp Make-a-Dream foundation, an organization dedicated to contemporary experiences for extremely ill children and their families.

Barry is a graduate of Babson College (BA), 1961, with a major in finance and minor in accounting. Barry is a recipient of the Lifetime Achievement Award in Mergers & Acquisitions sponsored by the Association for Corporate Growth in conjunction with Crains Business publications.