Frankfurt: Definitely not the Wurst.

Truth be told, I had not planned to write a travel blog about visiting Frankfurt in the dead of winter. With recent programs in Tokyo, Buenos Aires, and Paris, I was met with somewhat puzzled expressions when I shared with friends and colleagues that my next destination with GIC was Frankfurt. Although it remains the gateway to Europe as well as its financial capital, it seems Frankfurt rated rather low on the ‘fun to be had’ scale. Nevertheless, last week, I set forth to make the most of my free time in Europe’s financial hub.

I arrived to Frankfurt on Tuesday afternoon via the impeccably punctual high-speed train from Zurich in just under four hours. The next morning, I had some time to explore the city center and found myself doing so by searching for breakfast. I located the Kleinmarkthalle; an indoor food market that fulfills the grocery lists for citizens and satisfies the occasional hungry tourist alike. The original market, built in the late 19th century then destroyed during WWII was rebuilt in the 1950’s. It is not fancy or trendy or wrought with enthusiasm as the other markets I’m fond of such as San Miguel Market in Madrid or Borough Market in London. While Kleinmarkthalle is not especially glamourous, it is certainly functional – much like the city, one might suggest.

In my quest, I must have walked by a dozen butchers showcasing their wursts in all shapes and sizes, bakery stalls with mountains of fresh strudel and pretzels dangling from the counter tops, weathered stalls with grannies selling their homemade “green sauce,” a condiment local to the area made of a multitude of herbs and often served cold over eggs. There were a couple of coffee stalls, produce vendors,  international options offering Italian and Greek specialties, the fish mongers, poultry peddlers,  the market florist and someone selling homemade soaps. I noticed one or two stands specializing in ‘health food’ that seemed to be overlooked by the regular clientele who could not be bothered with the gluten-free movement. It’s not often I get intimidated by food, but wandering around the 61 stalls, a foreigner in a very local market where knowing only Cheers and God Bless You in the native language will not get me breakfast, I was concerned I may end up leaving hungry. 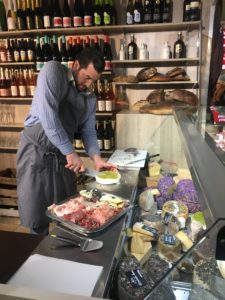 With schnitzel to my right and pretzels to my left, I locked eyes with one cheerful shop owner who was managing a shiny new stall called Main Gourmet. His cases were abundantly filled with a beautiful variety of cured meats and cheeses, with a wall full of neatly organized bottles wine behind him. Thankfully, I can speak charcuterie. He greeted me with a warm ‘guten morgen!’ and bashfully, I asked if he spoke English. He replied that he did. With a renewed sense of hope, I informed this jolly shopkeeper that I was in the market for breakfast. “Cheese?” he suggested with glee. He must have seen the delight in my eyes as he started working on a charcuterie plate made especially for me.  He walked me though every component of the dish as he cut it all by hand. Each piece had a story; Gouda covered in eye-catching blue cornflower petals, brie enveloped in pistachios, bleu cheese dressed with chocolate chips, plus wild boar salami, 12 hour oven-roasted ham, prosciutto, chorizo, and even a mortadella made from horse. Yes, your equine friend and mine, once a staple in German households and now nearly impossible to find, the Main Gourmet is one of the few vendors in the area who carries it (known as pferde should you see it on your next visit to Deutschland). The German wine soon followed. Gewürztraminer, reisling and sekt (sparkling wine) all delightful and all from the Hessen region of Germany. 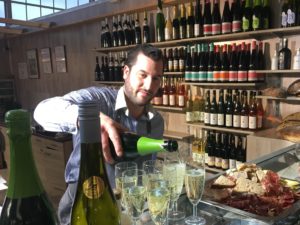 I stood at the counter top with my bountiful breakfast and learned the story of Kian Malek, the owner of Main Gourmet. Half-Persian, half-German, Kian is a horticultural engineer by trade. He had a job cultivating flower bulbs in the Netherlands but had aspirations of owning his own business. One year ago, with his wife expecting a baby and plans to fulfill his dream, Kian and his wife returned to Germany to open this shop. He has now been in business for eight months and 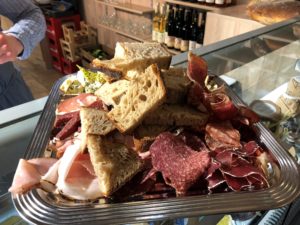 is a proud father of a little girl. His story warmed my heart and I wanted to contribute to the success of his growing business. I pledged to return two days later, hopefully with some GIC members in tow, for another fabulous cheese plate and to purchase some of the local wine that flowed freely that morning.  After GIC’s Roundtable, I rounded up six GIC Members and took them all to meet my new engineer turned cheesemonger friend. We arrived at Kleinmarkthalle and I went to seek out Kian who I spotted a few stalls away from his. He remembered me and greeted me with a warm embrace. Like a long lost friend, with his arm over my shoulder, we walked back to his stand where I introduced him to my GIC family. He welcomed our group with seven glasses of Gewürztraminer and one for himself, and a few minutes later, he popped a bottle of sekt and presented us with the world’s largest charcuterie plate. It was clear that customers go to Kian for more than just local artisanal cheese and pferde sausages. It’s a friendly smile and a warm disposition and the love he sends home with each customer that will make his business a success. 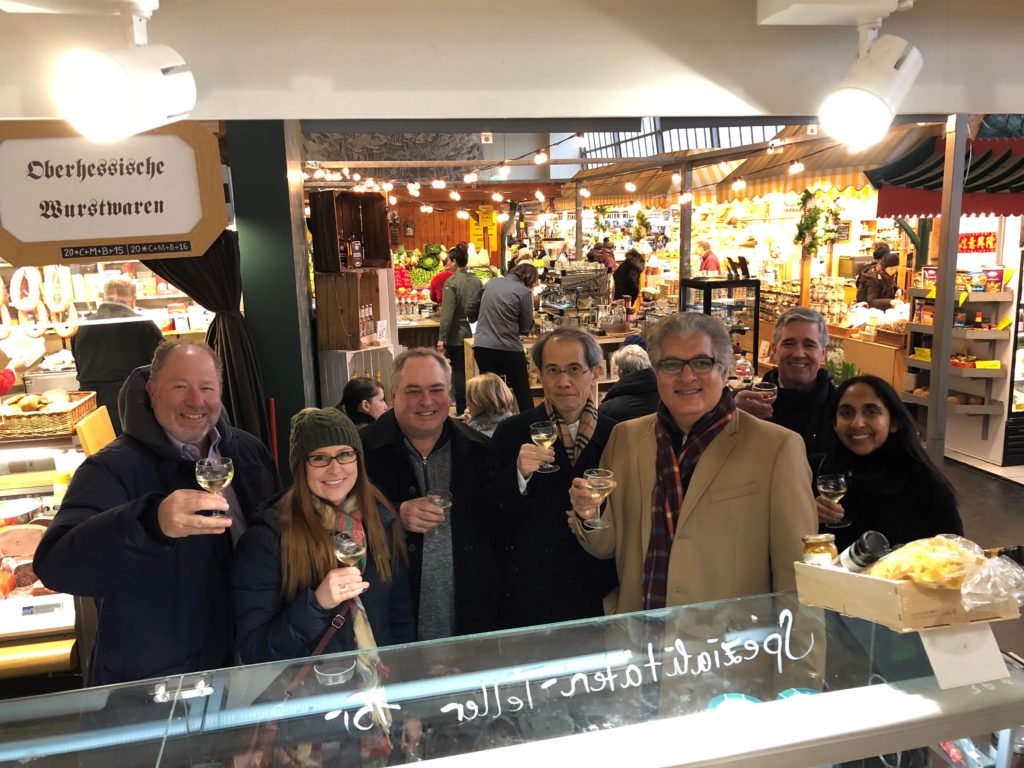 The Failure of MacroPrudential Regulation

2 responses to “Frankfurt: Definitely not the Wurst.”