Many have written, interviewed, and commented about the passing of Paul Volcker. We particularly like the commentary of Chris Whalen, who knew him better than many and whose  family had connections with Paul Volcker over the years. We also note our GIC colleague Catherine Mann’s remembrance. Cathy, that was an interesting haircut “back when.” 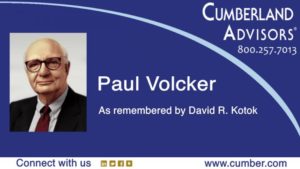 At the December 13th annual meeting of the Global Interdependence Center, the GIC’s College of Central Bankers inducted former Atlanta Fed president Dennis Lockhart and former Philadelphia Fed president Charles Plosser. Other members of the GIC’s CCB present were Tony Santomero (former Philly Fed president) and Christian Noyer (former Banque de France governor and past vice-president of the European Central Bank). The recognition of Paul Volcker’s service to the United States, to the world, and specifically to the transparency and independence of central banking, was repeatedly acknowledged both in the public presentations and in private remembrances.

For an extensive history lesson, readers are advised to turn to the Federal Reserve Board Oral History Project, for which Paul Volcker was interviewed in depth. See “Interview with Paul Volcker,” https://www.federalreserve.gov/aboutthefed/files/paul-a-volcker-interview-20080225.pdf; and, for background on the Oral History Project, see “Federal Reserve Oral History Interviews,” https://www.federalreserve.gov/aboutthefed/centennial/federal-reserve-oral-history-interviews.htm.

GIC history also reflects the support and advice of Paul Volcker. He was a force of influence and guidance during the early days, when Nobel Laureate Lawrence Klein, Philadelphia banker Fred Heldring, and UPenn professor Harold Perlmutter saw the need for critical thinking about globalization. Areas of focus in those early years of GIC included monetary and trade issues. GIC was ahead of its time, and its mission today is more important than its founders ever contemplated in those early days. The role of Paul Volcker was to focus GIC crisply on central banking and associated issues.

I remember Volcker’s worldwide promotion of accuracy in accounting standards. Volcker demonstrated his global reach and carried the program forward with the cachet he had acquired as a central banker with impeccable credentials. For a reference see his important speech on global accounting standards in 2002 at the Kellogg School of Management at Northwestern University: “A Time for Auditing Reform,” https://www.iasplus.com/en/news/2002/June/news478.

Now to an anecdote.

I was program chair of the GIC at the time when Paul Volcker launched the global initiative in accounting standards. Within the financial and economic community that initiative was widely applauded. In the general press it was ignored, since accounting standards do not arouse passionate interest among the mainstream media. I consulted with my colleagues at GIC and then Chair Bill Dunkelberg, and we agreed to invite Volcker to keynote a conference and specifically to speak to the need for a credible global accounting standard. Paul Volcker quickly accepted – he had been a speaker for GIC in the past and was a supporter of the GIC mission.

The chase for a date in the calendar was much harder. We finally set a date and booked the Philadelphia Museum of Art for the speech. By the time the date rolled around, Volcker’s topic had been discussed in many forums, and the process of reconciling global accounting standards was underway. Paul Volcker had achieved his goal of triggering this important international discussion. The positive aftereffects of that work continue today.

Now there we were in the art museum. We had a private conversation prior to and during lunch. Volcker was as gracious and considerate as always.

Some may know that he was a serious fly fisherman. And those who are fly fishers know that “reading the water” is an important part of the art form practiced with a fly rod. One of the flies used during certain periods in western states is called a humpy. You can learn all about tying and fishing with the humpy here: https://www.google.com/search?client=safari&hl=en-us&q=humpy+fly&sa=X&ved=2ahUKEwjyysLtyrjmAhUKCawKHZs6CwAQ1QIwFnoECBIQFQ&biw=375&bih=624.  During insect mating season there is fly pattern called, yes, a double humpy: https://www.ebay.com/i/253083366653.

Paul Volcker and I sat at lunch together, and the conversation turned to fly rods and flies and the art of fly fishing. The other folks at the table were mostly silent, but they were listening attentively. I had met them only briefly, and they were meeting Paul Volcker for the first time. Here they were, sitting at lunch with ex-Federal Reserve Chairman Paul Volcker, who, at 6’7”, towered above everyone else, and he was in a rapt discussion with a much shorter and certainly much lesser-known person, and the two of them were talking about fly fishing and streams and where they had both fished and where not and on and on, and then discussing the technical fly rod method of presenting a double humpy within a foot or so of a bank undercut in a fast-moving stream.

Following lunch, it was my task to introduce Paul Volcker for his speech. We had a three-minute chat before the formalities commenced. Volcker and I were standing together, looking at the Calder Sculpture in the middle of the atrium. He said, “The issue of accounting standards has had a lot of attention. Do you think it is still compelling enough for this conference?” I said quietly and most respectfully that I thought he was reading the water correctly, that the double humpy of accounting standards wasn’t the right fly, and that he could talk about anything he wished, and it would be most welcome. To this day I remember his chuckle at the metaphor.

Volcker agreed, and I kept the introduction brief. With customary eloquence he quickly dismissed the speech that he had prepared on the need for worldwide accounting standards. He referred the audience to the many documents and the public discourse on the subject that had already occurred. Then he segued to central banking and credit markets and the conditions that were pressing on the minds of the audience. He spoke without a single note. He answered questions. He became a professor and taught a classroom of seasoned adults with gentleness and graciousness. And all left with “nuggets” they hadn’t anticipated receiving.

Paul Volcker, global icon and stalwart defender of American economic and financial integrity, friend of the Global Interdependence Center, may the Elysium trout rise for you. May you rest in peace with “tight lines.”

How ‘second chance’ hires can boost the labor force, keep youth on track