×
Home > Blog > America has to end its toxic tax debate

America has to end its toxic tax debate 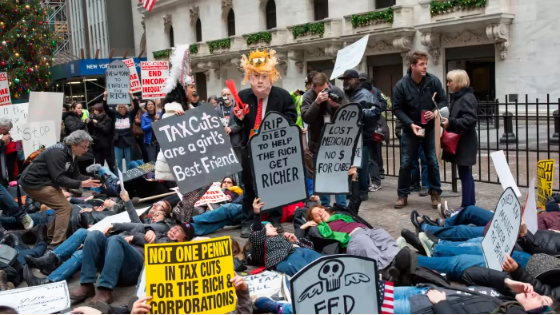 US protesters demonstrate against the 2017 tax bill about to be passed by a Republican congress on December 19 2017. © Andrew Lichtenstein/Corbis/Getty Images

In his Market Insights column “A painful era of ‘spend but don’t tax’ faces investors” (Opinion, September 13) Philip Coggan notes correctly that “central banks bore the brunt of supporting the economy in the 2010s, just as they had in much of the period since 1980” while rightwing politicians cut taxes and complained about deficits. Coggan also noted that lower taxes never correlated with faster growth in gross domestic product or with increased tax revenues.

He might have added that the same conservative politicians succeeded in making taxation a toxic word for many American voters.

Starting in 1965, these politicians have succeeded in reducing the total US tax burden to one of the lowest among OECD countries: 25.5 per cent of gross domestic product, compared with the OECD average of 33.5 per cent, according to 2020 figures.

As tax revenues declined and spending increased, deficits rose, of course, allowing those same politicians to insist on cutting spending on the social safety net — on infrastructure, education and healthcare.

Meanwhile, they pushed such policies knowing the Federal Reserve, the US central bank, would rescue them at times of stress, such as the financial crisis and the pandemic, by reducing interest rates to near zero and ensuring, through the tool of quantitative easing, that Treasury securities issued to finance the deficit would be fully taken up (on the secondary market) without tightening financial conditions.

If US politicians had dared increase taxation in line with the growth in GDP and (total factor) productivity, deficits would be far less worrisome than they are today.

And the Fed could better focus on controlling inflation.

This letter was originally published in Financial Times on September 18, 2022. Click here to view the original publication.

J. Paul Horne has been an active independent international market economist since retiring in 2001 as a managing director and European equity market economist at Salomon Smith Barney/Citigroup in London.

Based in Paris from 1975 to 1998, he was chief international economist of Smith Barney, member of the firm’s Investment Policy Committee and board member of the firm’s European subsidiary and international fixed income asset management group. Between 1970 and 1975, he represented the Rockefellers’ IBEC financial services group in Rome and Brussels. After graduating from St. Paul’s School and Yale University (B.A.), he was an economic-financial correspondent for Newsweek and The Times (London) based in Rome.

Paul is a board member of the Global Interdependence Center in Philadelphia, the USA Foundation of the American Library in Paris, on the Editorial Board and forecasting panel of the National Association for Business Economics (NABE in Washington, DC), the Committee for the Republic in Washington, D.C. and is on the Editorial Board of The European Institute’s European Affairs. He is a member of France’s Société d’Economie Politique and AFEDE association of business economists, The Conference Board’s Council of Alumni Economists and the National Economists Club. He is a member of The University Club (New York), the Metropolitan Club (Washington) and the Cercle de l’Union Interalliée (Paris).

Mr. & Mrs. Horne live in Virginia and Paris. He can be reached at [email protected]