7 surprises from a visit to Cuba

Rick Newman, Senior Columnist for Yahoo! Finance, joined GIC’s Delegation to Cuba from January 8 – January 12, 2023 and published a recap of the Delegation on Yahoo! Finance. Read an excerpt below and click here to read his writings in full.

HAVANA—We huffed up several flights of stairs at the Lizt Alfonso Dance Company studio wondering if it was worth breaking a sweat. Turns out, it was. A group of captivating dancers wowed us with several flamenco routines and sat on the floor afterward as we asked them questions. On the way back down, a few of us stopped to look out a barred, open-air window onto the rooftops below, or what would be rooftops if the roofs hadn’t collapsed. Gangly weeds sprouted inside the shells of neighboring buildings, which looked like bombed-out remnants of Russian attacks in Ukraine. Except it’s neglect and deprivation, not bombs, that have etched deep scars across Havana’s cityscape.

This type of contrast is everywhere in Havana: Beauty amid blight, grit competing with futility, ambition battling obstruction. I went to Cuba in early January with a group of 20 curious Americans on a trip sponsored by the Global Interdependence Center, a Philadelphia nonprofit focused on economic cooperation among nations. Most of us had never been to Cuba. We wanted to learn what America’s communist neighbor is really like and better understand why the United States has shackled the nation with ruinous sanctions for 60 years. The itinerary included several meetings with senior government officials, briefings by civic experts, and introductions to local businesspeople.

It was a timely trip. Cuba is in the news again as thousands flee for the United States, either through Latin America toward the southwest border with Mexico or on rickety boats across the Caribbean toward Florida. It’s the largest exodus from Cuba since Fidel Castro seized power in the 1959 revolution. The COVID pandemic crushed the island’s tourism business, which has barely returned. New sanctions imposed during the final days of the Trump administration sucked more oxygen out of the reeling Cuban economy. Many of those fleeing now are young, educated Cubans who see no opportunity in their home country. 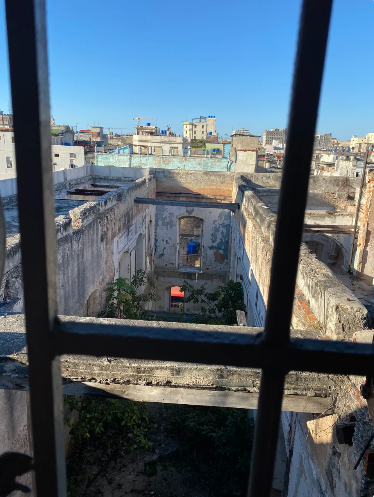 The view out the window of the Lizt Alfonso Dance Company studio in Havana. Photo: Rick Newman

President Biden said he would reverse Trump’s Cuba policies, but little has changed during his first two years in office. Pressure to address the migrant surge at the southwest border could be one catalyst for change. Cubans are now the second-largest group of migrants to the United States by nationality, after Mexicans. In January, the Biden administration began issuing visas at the U.S. embassy in Havana for the first time in four years, a possible sign of thawing relations between the two countries.

Passions run deep on the question of whether the United States should normalize relations with Cuba. Many Cuban Americans lost family property, or worse, when Castro took power, and strongly oppose any opening to Cuba as long as Castro’s Cuban Communist Party remains in power. Younger generations tend to favor normalization, but they lack the political clout of their elders. I went to Cuba feeling ambivalent and returned feeling more enlightened about possible ways forward. Here are some of the things I learned:

Click here to read the full write up by GIC Member and Delegate, Rick Newman, originally published on Yahoo! Finance.

Why Jeremy Siegel Is Cautiously Optimistic About 2023

Rick Newman is a columnist for Yahoo Finance, offering insightful, provocative takes on many of the biggest stories of our time. He was previously Chief Business Correspondent, and before that Pentagon correspondent, for U.S. News & World Report. He's also the author of four books, including Rebounders: How Winners Pivot from Setback to Success.