It’s that date again. Those of my economist friends who escaped the South Tower, as I did, still share special bonds with each other. We were attending the annual conference of NABE (National Association for Business Economics) which, by coincidence, was at the World Trade Center in New York that year. 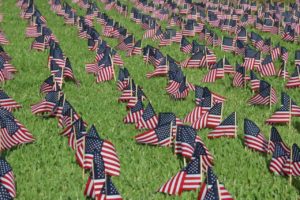 Many of us still see each other. A few join me in Maine at the annual gatherings there. This year the annual NABE meeting will be in Denver in early October.

A year or even several years can pass, and then a reunion leads to greetings and, sometimes, hugs. The subsequent goodbye includes “be safe” among the parting wishes.

18 years have passed since that meeting in New York.

“Words name things and then replace them” (https://greencardamom.github.io/BooksAndWriters/wiesel.htm). When I heard Elie Wiesel say it, he was delivering a philosopher’s discourse on the word holocaust.

Looking at the social and political landscape today, one might easily argue that Wiesel was prescient.  Does his remark about words naming things apply to “nine-eleven”?  Is 9/11 becoming a victim of alphanumeric transmogrification? I use this word choice of  “transmogrify” with the nuanced definition that doesn’t include humor.

History blurs. As Wiesel warned, words replace events as sure as generations succeed in gaining distance from those events.  Once 9/11 riveted everyone’s attention.  Now it is increasingly relegated to the list of historical events.

For me, closing my eyes, I vividly recall the smoke plumes against the blue sky, the jumping couple holding hands, the chaos around me.

For my grandchildren, unborn at the time, they will have only history.  9/11 will be only one item in a long and evergrowing list. “Grampa was there” might make it into their reflections, assuming they arrive at a place and time that prompts such reflections.

Words name things and then replace them.

Here’s a series of thoughtful essays. They say nothing about 9/11. They talk about lots of history.  They exemplify how words name things and then replace them. Perhaps someday nine-eleven will become one of the subjects of such essays.

I will close by sharing it and thank George P. for sending me the link.

“Experiments against reality: On the passage of time and totalitarian callousness,” The New Criterion, September 2019; https://newcriterion.com/issues/2019/9/experiments-against-reality

This writer is intentionally not commenting on the scheduling, timing and canceling of the planned and secret Taliban-Trump meeting. The real facts are unknown as this commentary is being written and released and the emotional components are intense.