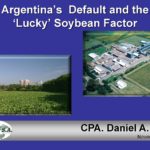 Daniel Alberto Miró graduated from St. George’s College in Quilmes, Argentina. Later he went on to the Catholic University of Argentina where he became a certified public accountant. He started working as chief economist at the Buenos Aires Grain Exchange in 1977. Several years later, he became the manager of economic affairs at the Oilseed Industry Chamber of Argentina. Now he is founder and president of Nóvitas S.A., an Agribusiness Consultancy Firm. Mr. Miró is also the main professor of the Commodities subject in the post graduate master studies at the UCEMA University in Buenos Aires and a professor of ... Read More