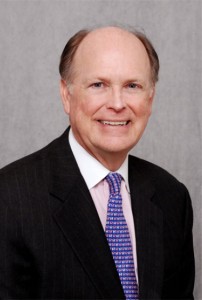 The Global Interdependence Center invites you to join us as we honor Charles Plosser, President of the Federal Reserve Bank of Philadelphia, as the 2011 recipient of the Global Citizen Award.

It is our honor to recognize Dr. Plosser for his commitment to encouraging global dialogue and free trade, principles outlined in our Declaration of Interdependence. As a member of the Federal Open Market Committee (FOMC), he has been intimately involved with making decisions that affect our ever increasingly interdependent global economy. In addition to lending the support of the Philadelphia Federal Reserve to many GIC programs and events, President Plosser continues to support the mission of GIC by serving as a speaker and delegate for numerous GIC conferences domestically and internationally.

Charles Plosser
Charles I. Plosser became the Federal Reserve Bank of Philadelphia’s 10th president and chief executive officer on August 1, 2006. Before coming to Philadelphia, he was the John M. Olin Distinguished Professor of Economics and Public Policy and director of the Bradley Policy Research Center at the William E. Simon Graduate School of Business Administration, where he also served as dean from 1993 to 2003. He was also a professor of economics in the Department of Economics at the University of Rochester, a senior research associate at the Rochester Center for Economic Research in the university’s College of Arts and Science, and a research associate at the National Bureau of Economic Research in Cambridge, Massachusetts. He has also been a visiting scholar at the Bank of England and the Federal Reserve Bank of Minneapolis.