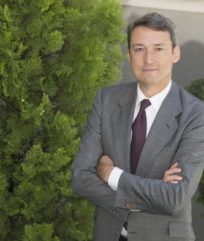 Director of the Rafael del Pino Foundation, Vice president of the United Nations Global Compact Spanish Network, President of the Spanish State Economists Association, Founder and President of the NGO Liberdom and member of the Editorial Boards of the academic magazine Información Comercial Española and Ceteris paribus blog.

Bachelor in Economics (Autónoma University of Madrid), Ph.D in Law (Complutense University of Madrid) and State Economist and Trade Specialist (highest Degree on Public and International Economics awarded by the Spanish Public Sector through competitive examination). Officer of the Royal Orden de Isabel La Católica, Leão de Oro of the Republic of Angola (AIA) and I Essay Prize Casa África.

Previous positions: Economic and Commercial Attaché at the Spanish Embassy of Spain in Angola, Namibia, Congo, DR Congo, Sao Tome and Principe and Zambia; Director at ICEX; and Deputy Director General of the Court of Competition. Member of the Boards of Directors of several companies and institutions. Professor of Economic Analysis at the Carlos III University of Madrid, along with other institutions, and Chairman of the Department of Economics of the Ateneo de Madrid for more than ten years. Spanish representative on the Board of Directors of CERRM and the following groups and international committees: Export Promotion of the European Commission; Committee on Competition Law and Policy of the OECD; Industry Committee of the OECD; and Industry Group of the Commission and the European Council.