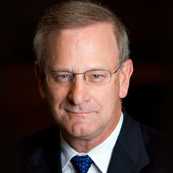 Mr. Hoenig directed Federal Reserve activities in the Tenth Federal Reserve District — an area that spans a large portion of the central United States including Colorado, Kansas, Nebraska, Oklahoma, Wyoming, the northern half of New Mexico and the western third of Missouri. The Bank is one of 12 regional banks in the Federal Reserve System. In addition to its participation in setting national monetary policy, the Bank is also responsible for supervising and regulating numerous commercial banks and bank holding companies, serving as the bank for the U.S. government and for commercial banks and providing other payments services to depository institutions.

Mr. Hoenig received his doctorate in economics from Iowa State University. He joined the Federal Reserve Bank in 1973 as an economist and was a senior officer in banking supervision during the U.S. banking crisis of the 1980s. He assumed the role of president on Oct. 1, 1991. He served as chairman of the Federal Reserve Conference of Presidents – Committee on Regulation, Bank Supervision and Legislation. As president, Mr. Hoenig was especially outspoken about the regulation of the financial industry and the role of monetary policy during the recent crisis.

He is a native of Fort Madison, Iowa, and resides in Kansas City, Missouri.