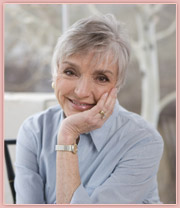 Born September 26, 1939, Terrell Harris Dougan grew up in Salt Lake City. Her first published work appeared when she was in third grade, reporting news from her elementary school for the local newspaper. By her senior year in high school, she was a stringer for Good Housekeeping magazine’s column on trends in the younger generation. In her sophomore year at Stanford University, she was one of twenty winners of Mademoiselle Magazine’s College Board Contest.

Terrell gave birth to her first daughter, Katy, and also acquired a German shepherd puppy which refused to be trained. By the time she had her second daughter, Marriott, she took out her frustrations by writing a piece about the dog, which she eventually submitted to Salt Lake City’s Deseret News. The editor asked her to write more, and from 1967 to 1980 her humor column, Of All Things, appeared every Monday evening. It won an award for Best Personal Column from the National Association of Press Women in 1975.

She also co-wrote and self-published This is the Place: An Entertaining Guide to Salt Lake City, with her friend Jo Rose, which was updated ten times over twenty years. The book We Have Been There: A Guide for Families of People with Mental Retardation, which she co-edited with Pat Vyas and Lyn Isbell, is a collection of stories from the heart from families all over Utah, and by the mentally disabled themselves. It was eventually picked up by Abingdon Press and is still used in some college classrooms in special education around the country.

Terrell wrote an essay, Flying Chickens and Full Circles, in the national contest of Writers@Work, Utah’s serious writer’s conference. This essay won an honorable mention in the Creative Non-Fiction category, and this gave her the impetus to expand on the subject of caring for her younger sister Irene, and to complete her book, That Went Well: Adventures in Caring for My Sister.

Terrell lives with her husband Paul, in Salt Lake City. Her two daughters and their families live five minutes away, and Irene lives just up the hill, happy and busy with companions who care for her and love her.