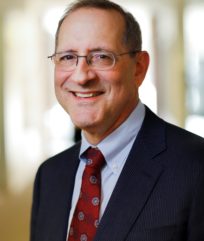 Stephen G. Cecchetti is Rosen Family Chair in International Finance at the Brandeis International Business School. Before rejoining Brandeis in January 2014, he completed a five-year term as Economic Adviser and Head of the Monetary and Economic Department at the Bank for International Settlements in Basel, Switzerland. During his time at the Bank for International Settlements, Cecchetti participated in the numerous post-crisis global regulatory reform initiatives. This work included involvement with both the Basel Committee on Banking Supervision and the Financial Stability Board in establishing new international standards.

Cecchetti’s academic appointments include being on the faculties of the Stern School of Business at NYU (1982-1987) the Department of Economics at The Ohio State University (1987-2003). In addition to these other appointments, he has served as Executive Vice President and Director of Research, Federal Reserve Bank of New York (1997-1999); Editor, Journal of Money, Credit, and Banking (1992-2001); Research Associate, National Bureau of Economic Research (1989-2011); and Research Fellow, Centre for Economic Policy Research (2008-present). In 2016, he received an Honorary Doctorate in Economics from the University of Basel.