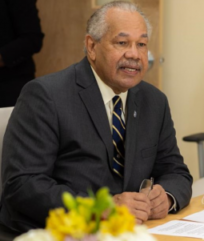 President and Chief Executive Officer, University of The Bahamas

Dr. Smith, a graduate of Saint Augustine’s College, Nassau Bahamas, received his doctorate of education degree from the Harvard University Graduate School of Education in the area of Administration, Planning and Social Policy. He also earned a Master’s Degree in Education with a Concentration in International Development from Harvard University, a Master of Arts degree from Fisk University in Clinical/Educational Psychology, and a Bachelor’s in Psychology from Saint John’s University, Collegeville, Minnesota.

Dr. Smith has served as Dean of the Graduate College at Hampton University, and in several vice president positions, including Student Affairs, Administrative services, and Institutional Planning. He served as director of strategic planning, and professor in a PhD. Program in Educational Management, teaching a course entitled Strategy and Strategic Planning. Dr. Smith’s previous portfolios included institutional effectiveness, continuous improvement service training programmes, assessment of all academic and non-academic programs, university athletics (Division 1, NCAA), Internal Auditor and the Office of Institutional Research, (Operations Analysis and Research), and all aspects of Enrollment Management.

He is the recipient of the 2016 JCN International Person of the Year Award, the St. Augustine’s College Alumni Association Lighthouse Award for distinguished Service in Education, and led the University of The Bahamas in being one of six institutions, globally, in being a recipient of the Ellucian Impact Award for significant advancements in the use of technology. He has been inducted into Chi Alpha Epsilon Academic Honor Society, Alpha Chi Chapter; Omicron Delta Kappa, the National Leadership Honor Society; and Delta Mu Delta, National Honor Society in Business Administration.

Dr. Smith has participated in several professional development institutes and currently serves on the boards of the National Art Gallery of The Bahamas, The Bahamas National Trust, and the American Association of State Colleges and Universities, headquartered in Washington, DC.

As the last President of the College of The Bahamas, Dr. Smith was directly responsible for overseeing the final stages of the College’s transition to University of The Bahamas. In February 1977 when the College was officially opened, the then Prime Minister of the Commonwealth of The Bahamas, Rt. Hon. Lynden O. Pindling, foreshadowed that the institution would eventually become the nation’s university.  Some thirty-nine years later, after much work, development and planning, the University of The Bahamas Act was passed on 4th August 2016 and assented to on 15th August 2016.  The Act came into force on 10th November 2016, the institution’s Charter Day when Dr. Smith was inaugurated as its first President.

As President of this new institution, Dr. Smith is committed to ensuring the realization of the University’s mission: to advance and expand access to higher education, promote academic freedom, drive national development and build character through teaching, learning, research, scholarship and service.

A father of four, Dr. Smith is married to Dr. Christina C. Smith. They have two grown children, Samantha Ilia and Sean David.