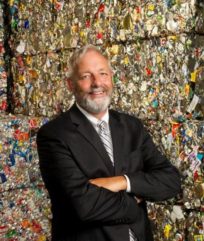 Richard S. Dovey is president of the Atlantic County Utilities Authority (ACUA), a position he has held since 1990. Mr. Dovey oversees a staff of 250, an annual operating budget of $60 million and a capital budget averaging $5 million yearly.

While Mr. Dovey has served as president, ACUA wastewater and solid waste operations have been nationally recognized for excellence in innovation, efficiency and environmental stewardship. Mr. Dovey is a strong proponent of renewable energy and has initiated many green projects at the ACUA, most notably the construction of New Jersey’s first wind farm in Atlantic City. In addition, the ACUA has implemented a 500 kw solar project and a landfill gas to electric project, operates New Jersey’s largest biodiesel fleet, has the first public compressed natural gas (CNG) station in Southern Jersey and hosts a single stream processing center.

Prior to joining the ACUA, he served as department head of Regional Planning and Development for Atlantic County Government and manager of the Rutland County, Vermont, Solid Waste District.

Mr. Dovey is active in numerous community and statewide organizations. He currently serves as chair of the Sustainable Jersey Board of Trustees, chairman of the Egg Harbor City Industrial Commission, and vice chair of the Richard Stockton College Foundation Board. He serves on a number of advisory boards at Richard Stockton College, Rowan University School of Engineering, Atlantic Cape Community College and Atlantic County Institute of Technology.

Mr. Dovey graduated from the Richard Stockton College of New Jersey in Pomona, N.J., with a Bachelor of Arts in urban studies. Since 1986, he has resided in Egg Harbor City, N.J., with his wife, Mary