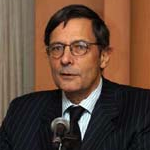 Philippe d’Arvisenet joined BNP’s Large Corporates Department in 1982 then became head of BNP Economic Research Department in 1994. He has been head of BNP Paribas Economic Research Department since 2000. He was also rapporteur at the Commissariat Général au Plan and at the Conseil National du Crédit. He has served as vice-chairman of the French National Association of Business Economists from 1986 to 1990. He has been a member of ICCBE (International Conference of Commercial Banks Economists) since 2000. Mr. d’Arvisenet is also an associate professor of economics at Paris University.

BNP Paribas is a European leader in banking and financial services with a significant and growing presence in the United States and leading positions in Asia. The group is the fifth largest international banking network, with presence in over 85 countries and 173,200 employees. As of December 31, 2008, BNP Paribas had a net banking income of €27,376 mn.

Mr. d’Arvisenet received his Ph.D. from Paris University. He worked as a consultant at the Commissariat Général au Plan, the french economic planning unit depending on the prime minister office, where he was successively in charge of incomes policy and international affairs.