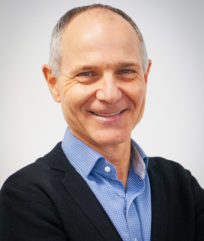 Oved Amitay is the Chief Executive Officer at Solve M.E. He has dedicated most of his professional career to the development of life-changing therapeutic options for people affected by rare genetic diseases.

Throughout his career, Oved had extensive engagements with healthcare systems and patient advocacy organizations around the world, forging collaborations to address the needs of people affected by rare genetic diseases. Oved is frequently invited to speak on topics related to orphan drugs, the development and commercialization of therapies for patients with rare diseases.

Oved is a registered pharmacist, trained at the School of Pharmacy, Hebrew University in Jerusalem, and holds an M.Sc. in Pharmacology from Northeastern University in Boston. He has a certificate from the program for Critical and Creative Thinking at the University of Massachusetts Boston. Oved also has more than twenty years of leadership experience as an officer in the Israeli Defense Forces.

Oved served as Chief Business Officer at CENTOGENE (NASDAQ: CNTG), a global leader in the diagnostics of rare hereditary disorders where his overall responsibility for the company´s programs with the biotechnology and pharmaceutical industry included enhancing existing partnerships and establishing new collaborations to facilitate drug development and improve treatment outcomes.

Oved joined CENTOGENE from Arrett Neuroscience, where he held the position of President and Chief Operating Officer, having led the company’s strategy for developing therapies for Rett syndrome. Prior to that, he served as Vice President, Head of Commercial at Alnylam Pharmaceuticals (NASDAQ: ALNY), where he played a lead role in the organization’s transition from a technology-platform focused company to a patient-centric drug development and pre-launch enterprise. Oved had a long tenure at Genzyme Corporation (now Sanofi Genzyme) as Vice President, Strategic Development, responsible for program management, business development, market assessment, and business planning for the rare genetic diseases franchise. Prior to that position, he was General Manager of the Gaucher Disease and MPS Portfolios, where he was responsible for the flagship product Cerezyme®, leading it to peak sales of over $1.2 billion. He also oversaw the development of the drug Eliglustat, which was approved by the FDA and EMA for the treatment of Gaucher Disease. Oved joined Genzyme in 1998 and held positions of increasing responsibility in regulatory affairs, marketing, and business development in Europe and the Middle East. Prior to joining Genzyme, he was a staff pharmacologist at Peptor Ltd. (Israel) and Cambridge NeuroScience, Inc. (MA, USA), where he was involved in early-stage drug development programs.

He is also a Founding Advisor of Splisense Therapeutics, Israel.