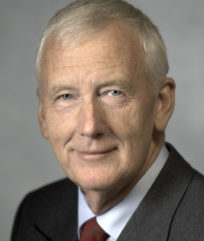 Governor and Chairman of the Board, Danmarks Nationalbank

Nils Bernstein serves as the governor and chairman of the board of Danmarks Nationalbank. He is a member of the European Central Bank’s General Council and the chairman of Danmarks Nationalbank Jubilee Fund. In 1963, he received his MSc in Electro Mechanics from Copenhagen University. From 1970-1975, Mr. Bernstein was secretary of finance, and from 1975-1977 he served as the secretary of finance at the embassy of Denmark in Washington, D.C. Nils Berstein was the secretary of state for finance in Denmark from 1978-1979. From 1980-1983 he served as the head of the budget department within the Ministry of Finance. He was appointed the secretary of the Department of Administration, Finance from 1984-1986 while simultaneously the permanent secretary of the Ministry of Agriculture from the years 1981-1994. After leaving the post, Nils acted as the secretary of agriculture and fisheries from 1994-1996. In 1996, he became the secretary to the prime minister while also serving on the council of the state secretary. Furthermore, Mr. Bernstein has held various board seats throughout his career including Agriculture Lottery, 1988-2005, GirobankA/S, 1995-96, chairman of the board of the Kingdom of Danish Fisheries Bank, 1995-96, chairman of the Danish-Faroese Cultural Foundation and the Danish-Greenlandic Culture Fund, 1996-2005, and the Danish Expedition Foundation, 2004-05.