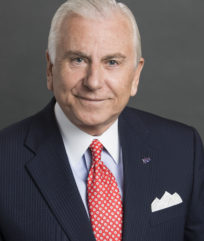 Dr. Nido Qubein serves as the president of High Point University where, even in the middle of the Great Recession, he increased enrollment by 245%, grew net assets from $56M to almost a billion dollars, created seven new academic schools – most recently adding the Webb School of Engineering, and attracted $500 million in philanthropic investments. His family is among the institution’s most generous donors.

Qubein has led HPU’s total enrollment this year to a record-breaking 5,600 students, even in the midst of the nation’s COVID-19 challenges. And while total enrollment grew by 5.6%, other records include 1,000 students enrolled in graduate programs and, at 20% of entering students, HPU’s largest population of diverse students.

He came to the United States as a teenager with limited knowledge of English and only $50 before going on to build business partnerships in banking, real estate, publishing, and retail businesses.

Prior to his role as HPU president, Dr. Qubein rose to prominence as an internationally known author and consultant who has given more than 7,500 presentations worldwide.

He serves on the corporate boards of several Fortune 500 companies including Truist, the 6th largest bank in the nation, La-Z-boy, and nThrive Healthcare. Qubein is also executive chairman of the Great Harvest Bread Company.

He is inducted into the Horatio Alger Association for Distinguished Americans, along with Oprah Winfrey and Colin Powell. He is also the recipient of the DAR Americanism Award and, along with four U.S. presidents, the recipient of the Ellis Island Medal of Honor. Dr. Qubein has also been recognized as both the Citizen of the Year and Philanthropist of the Year in his home city of High Point. Most recently, he was named the Honorary Chairman for the internationally recognized PGA Wyndham Championship.