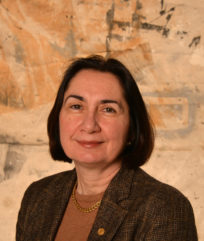 Mine K. Yücel is Senior Vice President and Senior Research Advisor at the Federal Reserve Bank of Dallas. She has been with the Bank since 1989 and has been head of the Bank’s micro/regional/energy group and director of publications for many years. Yücel analyzes the regional economy and energy markets on an ongoing basis and has published numerous articles on energy and regional growth.

Yücel is a member of the National Association for Business Economics board of directors and was president of the International Association of Energy Economics in 2011, an institution with 102 member countries. She is also past president of the United States Association of Energy Economics (USAEE). She has served on the executive boards of these two organizations, as well as Executive Women of Dallas, Dallas Area Business Economists, the Dallas Chapter of Women in Technology International, Inc. and the Greater Dallas Chamber’s Board of Economists. In 2006, she was chosen as one of the recipients of the Key Women in Energy—Global Award. She received the USAEE Senior Fellow Award in 2007 and the Energy Journal Best Paper Award in 2009.

Before joining the Bank, she was an assistant professor of economics at Louisiana State University. She has a B.S. and an M.S. in mathematics from Bogazici University in Istanbul, Turkey, and a Ph.D. in economics from Rice University in Houston.