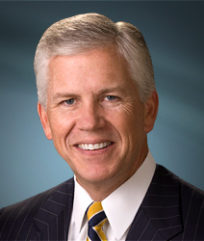 Michael K. Farr is president and majority owner of Farr, Miller & Washington, LLC. He is chairman of the investment committee and is responsible for overseeing the day-to-day activities of the firm. Under his leadership, the firm has grown to over five hundred million dollars in assets, and has enjoyed performance ranked among the top firms in the country. Prior to joining FM&W, he spent six years with Alex. Brown & Sons, where he was a principal. Mr. Farr is a graduate of the University of the South in Sewanee, Tennessee.

Mr. Farr is heard on Associated Press Radio and National Public Radio, and he is quoted regularly in the Wall Street Journal, Forbes, Fortune, The Washington Post, Businessweek, USA Today, and many other publications. Mr. Farr was a long time recurring panelist on PBS’ “Wall Street Week”. He is currently a regular guest host on CNBC’s “Squawk Box”. He is a member of the Economic Club of Washington, The Young President’s Organization, and The Washington Association of Money Managers. Also, he is the author of A Million Is Not Enough which will be published by Warner Books.