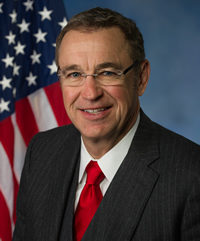 Matt Salmon was elected to the United States Congress on November 6, 2012 to represent the people of Arizona’s 5th Congressional District. Matt was appointed by his peers to serve on the House Foreign Affairs Committee and serves as chairman of the Subcommittee on the Western Hemisphere. He also serves on the House Committee on Education and the Workforce.

Matt attended public school in Mesa, Arizona and graduated from Arizona State University with a bachelor’s degree in English literature and an MPA from Brigham Young University.

After completing his education, Matt spent 13 years in the telecommunications industry in Arizona. In his early career, Matt learned invaluable lessons regarding the effect of government regulation on private enterprise. With the ever increasing expansion of government and burdensome tax rates on American citizens and small businesses, Matt was called to begin a life of public service.

In 1990, Matt was elected to the Arizona State Senate, where he served from 1991 until 1995. During this time, he served as assistant majority leader and chairman of the Rules Committee.

In 1994, Matt was elected to the U.S. House of Representatives, where he served three terms. As the only member of Congress fluent in Mandarin, along with his position on the International Relations Committee, Matt led multiple U.S. delegations to China, one of which secured the release of political prisoner Song Yongyi. During his service, Matt was named a “Watchdog of the Treasury” for six consecutive years and earned the “Taxpayer Hero” award from Citizens Against Government Waste. In 2000, Matt remained faithful to a self-imposed term limit pledge and retired his seat.

After the passage of the Affordable Healthcare Act and the expansion of government regulation during an economic crisis, Matt again answered the call to serve. In 2012, Arizona reelected him to serve in the U.S. House of Representatives. Matt wants to ensure the voices of all Arizonans are heard and looks forward to advancing pro-business policies, cutting government waste and balancing the federal budget once again.

Matt has spent the last 34 years happily married to his best friend, Nancy. They are the proud parents of four children and the proud grandparents of six grandchildren.