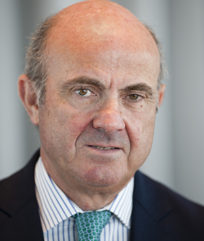 Vice-President of the European Central Bank

Luis de Guindos has been Vice-President of the European Central Bank since 2018. Prior to this position, Sr. Guindos served as the Chief Executive Officer for AB Asesores, an industrial and intellectual property consultancy firm, from 1988-1996. He served as Vice Chairman of the Economic Policy Committee of the European Union and the Director General for Economic and Competition Policy from 1996-2000. From 2000-2002, he served as the Secretary General for Economic and Competition Policy. He was the Secretary of State for Economic Affairs and member of the Economic and Financial Committee from 2002-2004. Sr. Guindos moved back into the private sector serving as the Chief Executive Officer Iberia of Lehman Brothers and Chief Executive Officer of Nomura Securities from 2006-2008. He was head of Financial Services at PricewaterhouseCoopers from 2008-2009. Sr. Guindos was the Director of IE Business School and PwC Center for the Finance Sector from 2010-2011. From 2011-2016, Sr. Guindos served as Minister of Economy and Competitiveness. He served as the Minister of Economy, Industry and Competitiveness from 2016-2018 before becoming Vice President of the European Central Bank in 2018. Sr. Guindos holds a BSc in Economics with honors from Colegio Universitario de Estudios Financieros (Spain) and earned a State Economist and Trade Expert public examination Grade “A” in the first order of merit.