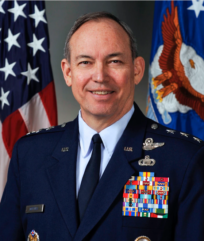 Lt. Gen. David A. Deptula is the first Deputy Chief of Staff for Intelligence, Surveillance and Reconnaissance, Headquarters U.S. Air Force, Washington, D.C. He is responsible to the Secretary and Chief of Staff of the Air Force for policy formulation, planning, evaluation, oversight, and leadership of Air Force intelligence, surveillance and reconnaissance capabilities. As the Air Force’s Senior Official of the Intelligence Community he is directly responsible to the Under Secretary of Defense for Intelligence.

General Deptula completed ROTC at the University of Virginia as a distinguished graduate in 1974, and remained to complete a master’s degree in 1976. Earning his wings in 1977, he has flown more than 3,000 hours (400 in combat) to include multiple operational fighter command assignments. He has taken part in operations, planning, and joint warfighting at unit, major command, service headquarters and combatant command levels. He has served on two congressional commissions charged with outlining America’s future defense posture — the Commission on Roles and Missions of the Armed Forces, and the National Defense Panel. Prior to assuming his current position, he served as Commander of the General George C. Kenney Warfighting Headquarters, and Vice Commander, Pacific Air Forces.

General Deptula has significant experience in combat and leadership in several major joint contingency operations. He was the principal attack planner for the Desert Storm coalition air campaign in 1991. He has twice been a Joint Task Force Commander – in 1998/1999 for Operation Northern Watch during a period of renewed Iraqi aggression where he flew 82 combat missions, and for Operation Deep Freeze, supporting forces in Antarctica. In 2001, the general served as Director of the Combined Air Operations Center for Operation Enduring Freedom, where he orchestrated air operations over Afghanistan during the period of decisive combat. In 2005, he was the Joint Force Air Component Commander for Operation Unified Assistance, the South Asia tsunami relief effort, and in 2006 he was the standing Joint Force Air Component Commander for Pacific Command.