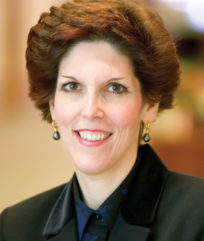 President and CEO of the Federal Reserve Bank of Cleveland

Loretta J. Mester took office on June 1, 2014, as the 11th president and chief executive officer of the Federal Reserve Bank of Cleveland. She participates in the formulation of U.S. monetary policy and oversees 1,000 employees in Cleveland, Cincinnati, and Pittsburgh who conduct economic research, supervise banking institutions, and provide payment services to commercial banks and the U.S. government.

Dr. Mester is an adjunct professor of finance at the Wharton School of the University of Pennsylvania and is a fellow at the Wharton Financial Institutions Center. Dr. Mester has published numerous articles in refereed academic and professional journals on economics, central banking, and other topics. She is managing editor of the International Journal of Central Banking and co-editor of the Journal of Financial Services Research.

Dr. Mester is a director of the Greater Cleveland Partnership, a trustee of the Cleveland Clinic, a trustee of the Musical Arts Association (Cleveland Orchestra), and a director of the Council for Economic Education. She was born in Baltimore and graduated with a BA in mathematics and economics from Barnard College of Columbia University and earned M.A. and Ph.D. degrees in economics from Princeton University.