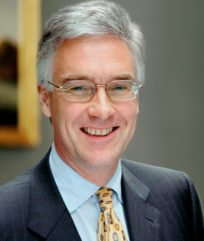 Lord Adair Turner has combined careers in business, public policy and academia. Since April 2013 he is senior fellow of the Institute for New Economic Thinking (INET).

From September 2008 to March 2013 Lord Turner was chairman of the UK Financial Services Authority, and from January 2008 until spring 2012, chair of the Climate Change Committee.

He is a visiting professor at the London School of Economics and at Cass Business School, City University; a visiting fellow at Nuffield College Oxford; and a trustee and chair of the audit committee at the British Museum.

Prior to 2008 Lord Turner was a non-executive director at Standard Chartered Bank, United British Media and Siemens UK; from 2000-2006 he was vice-chairman of Merrill Lynch Europe, and from 1995-99, director general of the Confederation of British Industry. He was with McKinsey & Co. from 1982 to 1995, building McKinsey’s practice in Eastern Europe and Russia between 1992 and 1995. He was chair of the Overseas Development Institute (2007 to 2010).

Lord Turner studied history and economics at Caius College, Cambridge from 1974 to 1978 and was college supervisor in economics from 1979 to 1981.