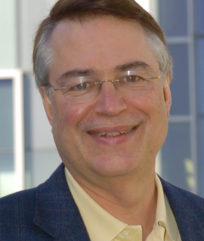 Larry Smarr, the Harry E. Gruber Professor of Computer Science and Information Technologies, joined the UCSD faculty in 2000 and became the founding director of the California Institute for Telecommunications and Information Technology [Cal(IT)²] in December 2000. Prior to UCSD, he was the founder and 15-year director of the National Center for Supercomputing Applications and the National Computational Science Alliance, both based at the University of Illinois, Champaign-Urbana (UIUC). He earned a Ph.D. in physics from the University of Texas at Austin in 1975, then did research at Princeton and Harvard before joining the UIUC faculty in 1979. Smarr is a member of the National Academy of Engineering, and a Fellow of the American Physical Society and the American Academy of Arts and Sciences. He was a member of the President’s Information Technology Advisory Committee, and is currently on the Advisory Committee to the Director of the National Institutes of Health and on the NASA Advisory Council.