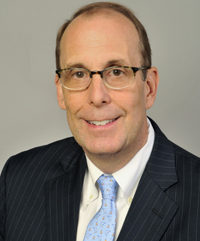 Mr. Otto is the president of U. S. Bank in St. Louis. In this capacity, Mr. Otto is the leader of U.S. Bank’s operations locally. In connection with these duties, he is Chairman of the U.S. Bank St. Louis Board of Directors.

Larry Otto joined U.S. Bank in 2015. He was previously president of Bank of America in Missouri. He spent over 30 years with Bank of America and its predecessor company in St. Louis. Mr. Otto has held leadership positions in both commercial banking and wealth management businesses during his career.

Mr. Otto is a graduate of Duke University, and is a St. Louis native.

Mr. Otto resides in Clayton with his wife, Jill. He has two grown children, Caroline and Genevieve, who reside in Raleigh and Chicago, respectively.