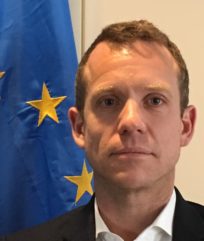 Counsellor for Economic and Financial Affairs, EU Delegation to the United States of America

Kristian (Kris) Orsini is Counsellor for Economic and Financial Affairs at the Delegation of the European Union to the United States. His primary areas of responsibility include US economic and economic policy developments, transatlantic economic relations and relations between the EU and Multilateral Financial Institutions, mainly the IMF.

Prior to joining the Delegation, Orsini worked in the European Commission Directorate General for Economic and Financial affairs (DG ECFIN), in the Directorate for fiscal and macroeconomic surveillance of Member States. Amongst other things, he has been involved in monitoring the macroeconomic conditionalities of the Spanish programme for the recapitalisation of financial institutions and overseeing the economic reform agenda of Croatia following EU accession.

Kris is a Swedish and Italian citizen and has lived and worked in France, Germany and Norway before joining the European Commission.