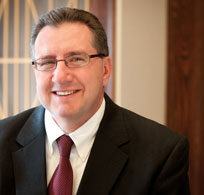 Kevin L. Kliesen is a business economist and Bank Officer in the Research Division at the Federal Reserve Bank of St. Louis.  He joined the Bank in 1988.  He holds an M.A. in Economics from Colorado State University.

In his position as a business economist, he analyzes current U.S. macroeconomic and financial market developments and trends for the Bank president and staff economists prior to each Federal Open Market Committee meeting. He also reports on and analyzes economic conditions in the seven states of the Eighth Federal Reserve District. Another important aspect of this position involves speaking to the general public and professional groups about U.S. and Eighth District economic developments.  He has written and published extensively and was instrumental in the development of the St. Louis Fed’s Financial Stress Index and the St. Louis Fed’s Price Pressures Measure.

In addition to his responsibilities at the Federal Reserve Bank of St. Louis, he taught part-time for the Department of Economics at Washington University from 2006 to 2013. Professionally, he is a member of the American Economic Association, the National Association for Business Economics (NABE), and the Association of Christian Economists.  In September 2011, he was recognized as a NABE Fellow, one of the organization’s highest honors. In October 2015, he was designated as a Certified Business Economist by the NABE.