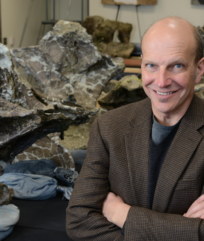 Dr. Kenneth Lacovara has unearthed some of the largest dinosaurs ever to walk the earth, including the massive 65-ton Dreadnoughtus, which appeared in the recent film Jurassic World: Dominion. He is a recipient of The Explorers Club Medal, the club’s highest honor. His TED talk has been viewed by over four million people, and his book, Why Dinosaurs Matter, published by Simon & Schuster, is a winner of the Nautilus Book Prize. Lacovara’s discoveries have landed him three times in Discover magazine’s 100 Top Science Stories of the Year, and he has appeared in 17 television documentaries. Currently, he is researching the extinction of the dinosaurs. He is the founding dean of the School of Earth & Environment at Rowan University, and is executive director of the Jean & Ric Edelman Fossil Park & Museum, where he and his team are building a $73M museum designed to connect people to deep time, the contingencies of natural history, and the fragility of our planet.