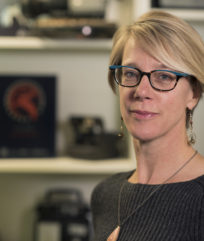 Kasandra is the executive director of Spy Hop Productions, a nonprofit youth media arts organization located in Salt Lake City, Utah. Founded in 1999, Spy Hop is dedicated to mentoring young people in the digital media arts to help them find their voice, tell their stories, and be empowered to affect positive change in their lives, their communities, and the World. Spy Hop serves over 15,000 young people statewide each year through in-school and after-school programming in film, audio, music and design. Kasandra serves on several boards, including the Alliance for Media Arts and Culture, the Utah Nonprofits Association, the Women’s Tech Council, and the Salt Lake Community College’s Center for Arts and Media’s Advisory Board. She joined Spy Hop in 2008, has over 25 years of experience working for nonprofit education and youth development organizations, and has a BA in Political Science from the University of Arizona and a Masters in Public Administration from the University of Washington.