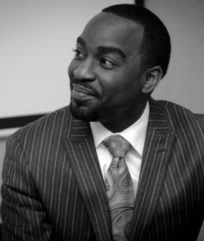 In June 2010, 2013, 2014 and again in 2015, Mr. Tiagha was selected by Pennsylvania Super Lawyers Magazine as a Rising Star for his work as a business/corporate lawyer. Prior to the law firm, Mr. Tiagha ran TKC Group, a business consulting firm that advised clients on risk management, developing and executing business growth strategies and securing financing for various corporate and real estate transactions. Mr. Tiagha was an associate in the business and finance departments of Ballard Spahr, LLP and Kleinbard Bell & Brecker, LLP. His practice included representation of businesses in connection with formation issues, the negotiation and preparation of commercial agreements, the sale and purchase of businesses, structuring of joint ventures and other strategic alliances, and in the private placement of securities. He also has experience in gaming industry law.

Mr. Tiagha earned his law degree from The George Washington University Law School where he received the J.B. and Maurice Shapiro Public Service Internship Award. He graduated from the University of Kent at Canterbury with a degree in international relations and politics with French (B.A. Hons.). He spent a year at L’Université Pierre Mendès-France in Grenoble, France where he received le Diplôme D’Administration et Politique Internationale (Diplôme API). Mr. Tiagha is fluent in French.

Mr. Tiagha proudly serves on the Board of Directors of his church Freedom Christian Bible Fellowship. Recently, he was appointed to the Board of Directors of the African American Chamber of Commerce of PA, NJ and DE. He also serves as the secretary of the Board of Trustees and chair of the Governance Committee of the CultureTrust Greater Philadelphia. He is also the Chair of the Legal and Immigration Committee of the Mayor’s Commission of African and Caribbean Immigrant Affairs. Mr. Tiagha is a trustee of the Center of Black Culture and International Understanding, an organization that is dedicated to the preservation of the archival material and advancing research on the culture of the Black Diaspora. He served as treasurer to Philadelphia Mayor Michael Nutter’s first term mayoral campaign in 2006-2007.