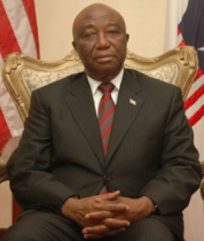 His Excellency Joseph Nyuma Boakai, Sr., is a public-spirited patriot and dedicated public servant who has served his country and people diligently. His service to the nation, which spanned more than 35 years, included various positions in government, private sector, agro-related, church and civil society. In all of those responsibilities, Vice President Boakai exhibited exemplary qualities, which is reminiscent of his humble beginnings. Born in the remote village of Worsonga in Foya District, Lofa County, on Nov. 30, 1944, Vice President Boakai has withstood the test of time and epitomized the Liberian adage which states: “It does not matter where you are coming from, but where you are headed.” He is a radiant of hope for his home town and a model citizen.

Considering his tremendous contributions to society, it did not come much as a surprise for him to have been selected as running-mate to Madam Ellen Johnson Sirleaf in the 2005 General and Presidential Elections on the Unity Party ticket. Hon. Boakai was elected along with President Ellen Johnson Sirleaf to chart a new course for Africa’s oldest Republic which is just emerging from a long and bitter civil war. During the 2011 Presidential Elections, Ambassador Boakai, was again selected by her Excellency, Ellen Johnson Sirleaf, now a Nobel Peace Prize winner, to serve as her running-mate in order to continue the development agenda that they have already started implementing in the first term. Vice President Boakai has continue to work along with Mrs. Ellen Johnson Sirleaf to restore law and order in Liberia, to ensure the reconstruction of the country, ensure that peace and tranquility exist in the country, encourage investors to take advantage of the investment climate in Liberia and ensure that basic social services are provided for the people of the country, etc, etc.

He is president of the Liberian Senate, and he presides two days a week over plenary sessions of that body. He performs supervisory functions over a number of institutions and agencies including the Liberia National Lotteries (LOTTO), the Liberia Marketing Association (LMA), the Liberia Agency for Community Empowerment (LACE), and the National Commission on Disarmament Demobilization Resettlement and Reintegration (NCDDRR).

As minister of agriculture, among his enormous duties and responsibilities, he was responsible for national agricultural policy formation, implementation support and research, regulatory services. He monitored activities and chaired boards of over 20 agricultural development projects and Agricultural Cooperative Development Bank and support institutions. He also chaired for one year, a 15 nation West African Rice Development Association (WARDA) and toured research projects of WARDA in Sierra Leone, Ivory Coast and Guinea Bissau. He also toured several agricultural projects in Denmark, Belgium, Great Britain, Malaysia and Ivory Coast in connection with poultry, cattle grazing, rubber and oil palm production and processing and assisted in the first PL-480 program evaluations for Liberia.

At the LPMC, he was the chief executive officer and as the first Liberian managing director of that entity, he was responsible for export marketing of coffee, cocoa and palm kernel oil and was responsible for arranging purchase, shipment and handling of the PL-480 program from 1980-1984.

As a result of his vast knowledge in the social sciences, the Honorable Vice President offered short term consultancy to a number of institutions including serving as chief technical advisor on agriculture policy, Ministry of Agriculture. He reviewed and evaluated the Liberian 1986 proposed Green Revolution and FAO World Bank 1986 Agricultural sector Review Document and evaluated AMSCO, Amsterdam-funded training program for projects in Uganda in 1994 and Tanzania in 1996.

In the civic and self-help sector, as part of his philanthropic support to humanity, Hon. Boakai supervised and personally financed up to 75 percent a seven-mile rural village road construction to Warsonga, Liberia. He worked with the Federation of Liberian Youth (FLY) and the Danish Youth to construct a school for 150 students and clinic for a community of 10 villages. He influenced the erection of OIC project in Foya Kama, Liberia, organized and headed fund raising for rural electrification of Foya Kama in Lofa County, Northern Liberia.

Hon. Boakai has served as member and chairman of many boards including chairman of the Liberia Finance and Trust Corporation, Chairman of the Board of Star Radio, member of the board of LOIC, member of the board of the Liberia Baptist Theological Seminary, founding member of Bethesda Christian Mission, founding organizer of the African Methodist Episcopal University, founding organizer of the C.W.A. Methodist University and President of the Monrovia YMCA, president of LUSU Resource Corporation and ex-president of the Monrovia Rotary Club.

He is a holder of a B.A. in business administration from the University of Liberia and Advance Management Certificate GIMPA, Ghana. He speaks English, reads and writes Mendi and Kissi.

He has been happily married since 1972 to Kartumu Y. Boakai. This union is blessed with four children (three sons and one daughter). He is the owner of LUSU Resource Corporation and co-owner of AGROMACHINES Liberia.