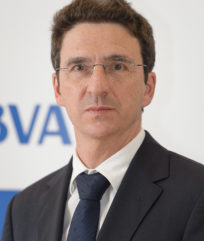 Currently Jorge Sicilia is chief economist of BBVA Group and director of BBVA Research. He leads a global team of economists distributed around Europe, US, Mexico, South America and Asia devoted to economic, financial and regulatory analysis. He is a member of BBVA’s ALCO and Regulatory Committee.

Previous to this position, Jorge Sicilia has been BBVA’s chief economist for North America supervising the teams conducting economic and regulatory analysis on the US and México, principal economist in the Monetary Policy Stance Division at the European Central Bank (ECB) in Frankfurt, Monetary and Financial Markets’ chief economist at BBVA in Madrid, head of the Department of Economic and Monetary Studies in Argentaria, head of Economic and Market Analysis in Analistas Financieros Internacionales (AFI) and economist in the Economic Studies Department of the Spanish Antitrust Committee.

He has given lectures on macroeconomics, financial markets and financial systems at CUNEF and Carlos III Universities in Madrid, as well as at post-graduate institutions, academic and non-academic conferences, and central banks fora.

He obtained his degree in quantitative economics at Universidad Complutense de Madrid in 1992, and an MsC in economics and finance at CEMFI in 1994. He is author of several economic and financial papers published in specialized magazines. He was member of BBVA Bancomer´s foundation and a member of the Private CreditorInvestor Committee for Greece, and is now member of the Financial Studies Foundation at the ITAM.