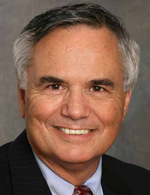 John Silvia is enjoying the process of launching his firm, John E. Silvia, Dynamic Economic Strategy. John recently retired from his position as Managing Director and Chief Economist for Wells Fargo. Based in Charlotte, N.C., he held that position since he joined Wachovia in 2002 as the company’s Chief Economist, this new launch will permit John to open his schedule for additional Speaking opportunities and Board positions while indulging in his passion for travel.

Prior to Wells Fargo, John worked on Capitol Hill as a senior economist for the U.S. Senate Joint Economic Committee and as Chief Economist of Senate Banking, Housing and Urban Affairs Committee. Before that, he was chief economist of Kemper Funds and managing director of Scudder Kemper Investments, Inc. John was awarded a National Association of Business Economics (NABE) Fellow Certificate of Recognition in 2011 for outstanding contributions to the business economics profession and leadership among business economists of the Nation. In 2010, he was recognized for the Best Inflation Forecast, the Best Overall Forecast and the Best Personal Consumption Expenditures Forecast by The Federal Reserve Bank of Chicago. John was named one of the Top 10 forecasters for the last four years by Bloomberg News in 2009 and the No. 2 forecaster by USA Today for 2008.

John serves as a member of the Blue-Chip Panel of Economic Forecasters and serves on an informal advisory group for the Federal Reserve Bank of Philadelphia. He serves as chair for the Economic Advisory Committee of both the Securities Industry and Financial Markets Association (SIFMA) Economic Advisory Roundtable and the American Bankers Association.

A strong supporter of education and civic affairs, John served as a member of the Business Advisory Council at the Walker College of Business at Appalachian State University in Boone, N.C., and on the President’s Council for Charlotte’s Central Piedmont Community College. He has previously served as a board member of the British American Business Council of North Carolina and served on the Economic Development Board for the State of North Carolina, a special appointment by the Governor. He also served on the Business Advisory Committee for the City of Charlotte.