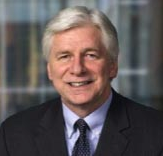 Since January 2008, John Murray has served as one of two deputy governors responsible for the Bank’s assessment of domestic and international economic developments in support of monetary policy decisions, conducted by the Canadian Economic Analysis and International Economic Analysis departments. As a member of the Bank’s Governing Council, he shares responsibility for decisions with respect to monetary policy and financial system stability, and for setting the strategic direction of the Bank.

Born in Toronto, Mr. Murray received a Bachelor of Commerce from Queen’s University in 1971, as well as an M.A. in economics and a Ph.D. in economics from Princeton University in 1974 and 1977, respectively. After completing his Ph.D., Mr. Murray taught at the University of British Columbia as an assistant professor and at the University of North Carolina as a visiting assistant professor. From 1985 to 1986, he also lectured at Princeton University. Mr. Murray joined the Bank of Canada in 1980 as a senior economist with the monetary and financial analysis department. In 1981, he was promoted to research officer and in 1982 he became assistant chief of the department. He served as research adviser in the monetary and financial analysis and international departments from 1984 to 1987. In 1987, he was appointed deputy chief of the international department, and in 1990, chief. Mr. Murray was appointed an adviser to the governor in January 2000.