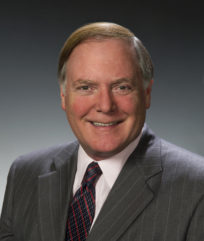 A disciple of the markets for more than 46 years, Jeff possesses a breadth of experience in the field few can match. He was managing director of research at Roney & Co. when it became part of Raymond James in 1999. Prior to that, he was managing director of equity capital markets for Sterne, Agee & Leach. His responsibilities there included equity research, investment banking, institutional sales and syndicate.

After graduating from St. Andrews in early 1971, Jeff began his career on a trading desk in New York, becoming a trading desk manager in 1972. In 1973, he joined E.F. Hutton & Company, where he began following equities and providing research commentary. He subsequently worked as a securities analyst for Wheat First Securities, and then Branch Cabell & Co., where he was director of research and acted as portfolio manager for the firm’s affiliate, Exeter Capital Management. Jeff was also director of research for the regional brokerage firm Ferris, Baker Watts, Inc., where he developed the firm’s research and institutional sales efforts.

Jeff is well known for his insightful and colorful stock market commentary when appearing on various programs on PBS, NPR, CNBC, Bloomberg TV, USA Network and Fox News, as well as various local radio and television networks. He is often quoted in publications such as The Wall Street Journal, The New York Times, Barron’s, The Washington Post, BusinessWeek, U.S. News & World Report, Fortune and SmartMoney, as well as on websites including thestreet.com and msnbc.com.