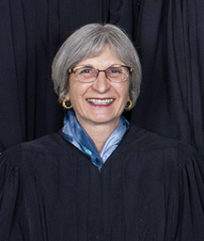 Jaynee LaVecchia was appointed an Associate Justice of the New Jersey Supreme Court, effective February 1, 2000.  Having now served more than twenty-one years on the Court, she is currently the Senior Associate Justice and the author of more than 300 opinions while on the Court, including opinions on school financing, affordable housing, employment, environmental and administrative law, and state constitutional principles controlling the actions of the Branches and agencies of State government.

At the time of her nomination by Governor Christine Todd Whitman and confirmation by the New Jersey Senate, Justice LaVecchia was serving as the New Jersey Commissioner of Banking and Insurance. Prior to holding that Cabinet office, Justice LaVecchia had been the Director of the Division of Law within the Department of Law and Public Safety. In that capacity, she supervised the approximately 450 state attorneys representing and counseling the departments and agencies of the Executive Branch of State Government.  She argued numerous matters before the New Jersey Supreme Court, and she represented the agencies of government in the trial and appellate levels of the federal courts for the District of New Jersey and the District of Columbia.

In addition to work in private practice and as a State trial attorney, Justice LaVecchia held several public sector appointments and positions.  She was the Director and Chief Administrative Law Judge for the New Jersey Office of Administrative Law from 1989 through July 1994, conducting contested case hearings and administering the office comprised of the corps of independent State Administrative Law Judges. She also served in the Office of Counsel to Governor Thomas H. Kean, first as an Assistant Counsel and then as Deputy Chief Counsel.

Justice LaVecchia is a double graduate of Rutgers University.  She received a B.A. degree in English Literature from Douglass College in 1976 and her Juris Doctorate from the Rutgers-Newark School of Law in 1979.  She has been a member of the New Jersey Bar since 1980.  While practicing, she chaired or served on various Supreme Court Committees, subcommittees, and other Court-assigned projects.  In 1996, she was elected a Fellow of the American Bar Association, and in 2015, she was elected to Membership in the American Law Institute.