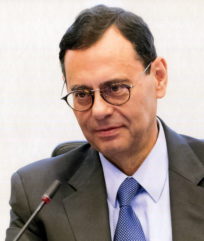 Jaime Caruana is, since June 2018, an independent member of the BBVA board.

Previously, Mr. Caruana was General Manager of the Bank for International Settlements from the 1st April 2009 to the 30th November 2017.

From 2006 to 2009, Financial Counsellor to the Managing Director and Director of the Monetary and Capital Markets Department of the International Monetary Fund.

From 2000 to 2006, Governor of the Bank of Spain, Spain’s central bank, and in that capacity, served on the Governing Council of the European Central Bank. He was also the Chairman of the Basel Committee on Banking Supervision from 2003 to 2006 and has been a member of the Financial Stability Forum (now the Financial Stability Board) since 2003 until Nov 2017.

Prior to joining the Bank of Spain, Mr. Caruana was General Director of the Spanish Treasury and worked in the private financial sector.

Mr. Caruana is also a member of the Group of Thirty.