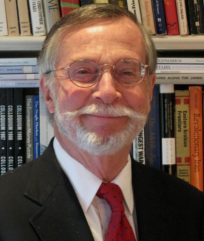 Paul Horne is an active independent international market economist since retiring as a managing director and European equity market economist at Salomon Smith Barney/Citigroup in London. He is on the boards of the Global Interdependence Center in Philadelphia; the Committee for the Republic in Washington, DC; and the American Library of Paris Foundation. He writes for The European Institute (supported by the University of Maryland and the Bertelsmann Foundation) and is on the forecasting and editorial panels of the National Association for Business Economics.

Previous positions: Smith Barney’s chief international economist and Investment Policy Committee member based in Paris 1975-1998; the Rockefellers’ IBEC group 1970-1975 and financial-economic correspondent of Newsweek and The Times (London) 1960-1970. He graduated from St. Paul’s School and Yale University. He and Mrs. Horne divide their time between Alexandria, VA and Paris.