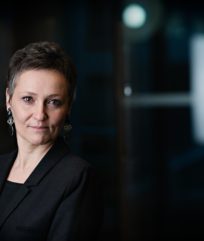 Isabelle Job-Bazille began her career with Paribas in 1997 as a country risk analyst for the Middle-East-Africa region.

She joined Crédit Agricole S.A. in September 2000 as an economist specializing in Japan and Asia before being appointed head of the Macroeconomics division in May 2005.

From 2007 to 2011, she worked with Crédit Agricole Corporate and Investment Bank’s Capital Markets Research teams, first in Paris and then in London, whilst continuing her responsibilities within Crédit Agricole S.A.

Isabelle Job-Bazille holds a doctorate in Economics from the University of Paris X Nanterre.