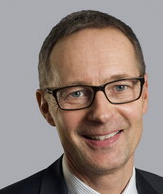 Mr. Berg is the group chief risk officer at CRO. He holds a Master of Science in law.