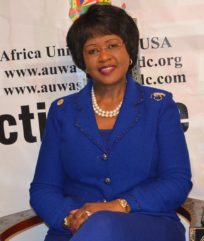 African Union Ambassador to the U.S.A.

H.E. Dr. Arikana Chihombori-Quao is the African Union Ambassador to the United States of America since December 1, 2016. She was nominated by HE Dr. Nkosazana Dlamini Zuma, Chairperson of the African Union Commission, to lead the African Union Mission to the USA, the first bilateral diplomatic Mission opened by the AU in 2007.

As the African Union Ambassador to the U.S., Dr. Chihombori-Quao is fully committed to reinforcing the longstanding and deep historic, cultural and economic relations between Africa and the U.S. She plays a key role in reinforcing the African Union strategic partnerships with the United States, grounded on shared values and mutual interests. Ambassador Chihombori-Quao is a strong believer in the promise that the African Union-U.S. partnership holds and that a prosperous, peaceful and integrated Africa is a shared strategic interest.

Prior to her appointment, Ambassador Arikana Chihombori-Quao was a renowned family medicine doctor in Murfreesboro, Tennessee where she has been practicing medicine for the last 25 years. Dr. Arikana Chihombori-Quao is known internationally for her diligent efforts to improve healthcare systems, particularly in countries in Africa, and to promote women’s rights around the globe. Nearly 20 years ago, at a conference organized by then-Africa Resources, Presidents Nelson Mandela and Robert Muugabe presented the noted philanthropist with an Achievement Award. This was her first major distinction which she highly appreciates and cherishes.

In September 2013, Dr. Chihombori-Quao was one of four women who represented Africa at the International Conference on Women’s Rights, hosted by the Government of Argentina in Mar Del Plata, Argentina. She delivered a moving speech on the topic, “Violence against Women and its Worldwide Effect.” At this conference, Dr. Chihombori shared the stage with two Nobel Peace Prize winners: Rigoberto Menchu of Guatemala and Alfonso Perez Esquivel of Argentina.

In 2015 at the 25th AU Summit held in Johannesburg, South Africa, Dr. Chihombori-Quao was one of the fifteen women who received the “Women of Excellence Award” alongside President Ellen Johnson Sirleaf of Liberia, Mrs. Joyce Banda, former President of Malawi, and Mrs. Winnie Mandela, the former first lady of South Africa, as well as several other prominent and remarkable African women.

It is worth indicating that upon graduating from medical school in 1986, Ambassador Dr. Chihombori-Quao did three years General Surgery at State University of New York in Brooklyn, NY, USA, and another residency in Family Medicine at Meharry Medical College in Nashville, Tennessee, USA. She is a member of the American Medical Association, American Academy of Family Physicians and Tennessee Academy of Family Physicians.