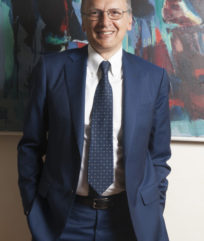 President of the International Conference of Commercial Bank Economists (ICCBE) since July 2015.

Graduate in Economic and Social Sciences at Luigi Bocconi University, Milan. After spending a short period as a teaching assistant, he joined the Banca Commerciale Italiana (BCI) Research Department in 1983 and became Head of Research in 1995.

From 1994 to 1999, lecturer in Monetary Economics at Bocconi University.

From 2007 to 2010, Chairman of AIAF, the Italian Association of Financial Analysts.

He holds offices at the Italian Bankers’ Association (ABI) and the European Banking Federation (EBF).

He is also a member of the Scientific Committee of a number of economic associations, including the Associazione Nazionale per l’Enciclopedia della Banca e della Borsa, the Roberto Franceschi Foundation and the Rosselli Foundation.

He is the author of many publications in the fields of monetary policy and financial markets, banking and the management of public debt.