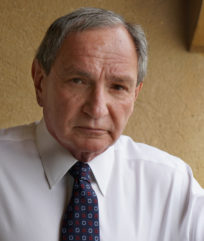 Founder and Chairman of Geopolitical Futures

Dr. George Friedman is Founder and Chairman of Geopolitical Futures, a company dedicated to forecasting the course of the international system (www.geopoliticalfutures.com). He is an internationally recognized strategist on global affairs who has been called “the creator of the field of geopolitical forecasting.”

Dr. Friedman is a New York Times bestselling author. His most recent book, THE STORM BEFORE THE CALM: America’s Discord, the Coming Crisis of the 2020s, and the Triumph Beyond, published February 25 and a National best seller, describes how “the United States periodically reaches a point of crisis in which it appears to be at war with itself, yet after an extended period it reinvents itself, in a form both faithful to its founding and radically different from what it had been.” Friedman predicts the decade 2020-2030 is such a period which will bring dramatic upheaval and reshaping of American government, foreign policy, economics, and culture.

His most popular book, The Next 100 Years, is kept alive by the prescience of its predictions. Other best-selling books include Flashpoints: The Emerging Crisis in Europe, The Next Decade, America’s Secret War, The Future of War and The Intelligence Edge. His books have been translated into more than 20 languages.

A very popular keynote speaker on international geopolitics, Friedman’s experience in military modeling, philosophy, intelligence and international affairs places him in high demand at numerous conferences and industry-specific events. He has briefed for numerous major military and government organizations and is frequently invited to speak internationally.

Prior to founding Geopolitical Futures, Friedman was Chairman of Stratfor, the geopolitical intelligence publishing and consulting firm he founded in 1996. He left Stratfor in 2015.

Friedman received his bachelor’s degree from the City College of the City University of New York and holds a Ph.D. in government from Cornell University. He lives in Austin, Texas.